We are researching early immigrants to the USA and Canada.

Many Canadian and American families can be traced back to early arrivals in 'America', but making the connection across the pond is often not so straight forward.

I am keen that we should use this forum to identify those key people, and then work together to trace their ancestors back to Scotland (or Ireland, or England). In some cases, families arrived via the West Indies. It would be good to identify them as well.

A starting point is the list in The Douglas Archives of 'Early Douglas settlers in America'. Suggestions for additions to this list would be very welcome.

Please make your contributions as full as possible, with dates and places included, as appropriate.

You need to be a member of North American immigrants to add comments!

As evidenced by Captain Russell’s letter, John Douglas was probably killed either on July 5th or 6th. Tradition has it that Douglas was accompanied by his friend William Benham, and that they, as was customary of most people traveling from Abingdon to the Clinch settlements, had stopped in Little Moccasin Gap, and were seated on a large flat rock, eating their lunch when a rifle cracked and Douglas was killed. A bronze plaque has been placed on the rock, probably by the D. A. R., and just east of the spot a wayside has been built, known as the "John Douglas Wayside", perpetuating the memory of this incident.

There was a connection between the Douglas, Benham and Hobbs families which may account for John Douglas’ friend William Benham being with him at the time of the slaying. For the foregoing data I am indebted to Gordon Aronhime, of Bristol, VA.

A man named John Benham settled on the north side of the North Fork of Holston River in 1769. William Benham was likely his son. He, the elder Benham owned about a thousand acres of land along the Holston River, about four miles or less below the village of Holston. John Benham was evidently a brother-in-law of the elder Vincent Hobbs. Benham had a son named Vincent, and the Benhams and Hobbs lived next farms to each other, coming to the area about the same time. John Benham (died 1800) had a fort between those near Saltville (that of Jeremiah Harrison) and the Anderson Blockhouse near Big Moccasin Gap. Benham had built his fort before the Revolutionary War. William Benham married Mary Kendrick.

John Douglas had probably been visiting with his friends and kindred, Benhams and Hobbs over at Holston, and was returning to the Clinch, along with William Benham when he was slain.

At a court held for Washington County, VA, on September 30, 1777, Edward Douglas (his father) was granted administration of the estate of John Douglas, deceased, with his securities being William Wilson and Richard Stanton, the latter living on Stanton’s Creek, below Dungannon, in Scott County, VA. The appraisers of the estate were John Blackmore, Blackmore’s Fort, Andrew Davis who lived at the mouth of Stoney Creek, near Blackmore’s Fort, and Alexander Ritchie, Sr., who lived on Clinch River, below Dungannon in Scott County.

Who were the two men that Captain Russell says were killed at Blackmore’s Fort?

This file contributed by: Rhonda Robertson

Can any one link to this couple ?

Hey, Russell, you've been busy with this one!

Have a nice Christmas,

"Our Quaker Friends of ye olden time; being in part a transcript of the minute books of Cedar Creek meeting, Hanover County, and the South River meeting, Campbell County, Va"

link to Tennessee family bibles: http://tnsos.net/TSLA/Bibleproject/search.php?keyword=&surname=...
There appear to be 7 bibles listed

CHATTANOOGA, Tenn. –  The Tennessee State Public Library has put a database of family Bibles online and available for searching by the public.

The database of 1,500 Bibles may serve as a treasure trove for genealogists and historians, a record of a time when Tennessee was wildly dangerous and human life seemed especially small and fragile.

Sherrill says among the Bibles in the database are one from 1538 and a book dating to 1753.

John Douglas , Hawkins county  , North Carolina in 1786 was recorded as a customer in the store books of Thomas Ames ... 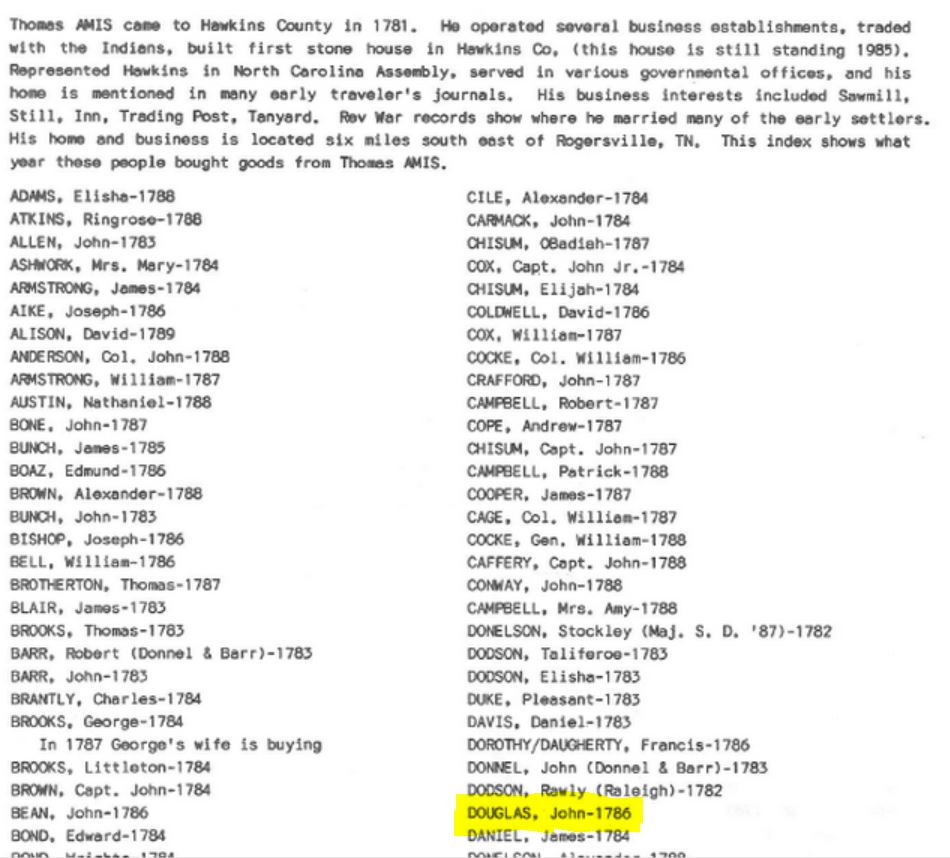