I have received the following request for information:

My paternal grandmother was a Douglass who's family came from Loughborough, Leicestershire (James). We think that family was previously in Halifax (John) and before that in Yarm (THomas) in Yorkshire. They claim to descend from the Caver's line. A silver spoon handed down in the family has the Douglas Caver's crest on it. There is a possibility that the Yarm line was Catholic.Does this appear in any of your records?

The Douglas Archives contains the following notable members of the family with Yarm connections:

Can anyone add more information? 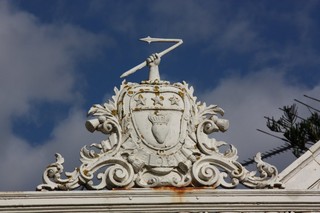 To add to the above, Alfred Douglass built Corio Villa, in Geelong, Australia, in 1855. It remained in the family til 1938. He reputedly is descended from John Douglas of Yarm.

The villa is adorned with the Cavers coat of arms.

Alfred was the great-grandson of John Douglass of Yarm.  Alfred was born in 1820 in Loughborough, where his father was a merchant, and died in 1885 in Geelong.

Other branches of his family appear to have used the same coat of arms, so perhaps there was something in it. Strictly speaking this particular version of the arms belonged to Thomas Douglas, Baillie of Edinburgh (c1616-1686), a son of the Cavers family, for whom they were recorded circa 1680. However no definite connection to John Douglass of Yarm has yet been conclusively established. We should be delighted to hear from anyone who could help to solve this puzzle!

This Yarn thread also interest me as there is Drysdale connection: http://www.british-genealogy.com/archive/index.php/t-78992.html?s=0...

If anyone else is researching, or is interested in, the Catholic Douglass family of Yarm, they are welcome to contact me.

John Douglass of Yarm, the father of the Bishop, may have practised as a surgeon-apothecary in nearby Durham, around 1735-55.  One of his other sons, William Douglass (1738-87), was also a surgeon, who eloped to Gretna Green in 1761 to marry a Protestant vicar's daughter, and then settled in Loughborough in Leicestershire, near his wife's family.

In his book 'Northern Catholics' (1966), Hugh Aveling states on p401 that the Yarm apothecary's brother was Thomas Douglas, an 'attorney at Yarm', but I am not clear on the source evidence for this and should welcome any further information from anyone.  He also (I believe incorrectly) suggests that Thomas was the father of the Bishop, not John.

I am not certain if this Thomas is the same Thomas who married Martha Kirton, or who had any connection to Charles II (the dates look rather improbable for this). Again, any more information or source evidence would be appreciated.

Yarm parish church register contains some possibly relevant burial entries (and this list may have missed others):

Re: Douglass who's family came from Loughborough, I have just posted an article about James Alexander Douglas (abt 1762-1830), son of William Douglas and Mary Higginbotham.  James married Charlotte Douglass on 7th March 1796, in Loughborough.

James is a descendant of Thomas Douglas of Yarm.