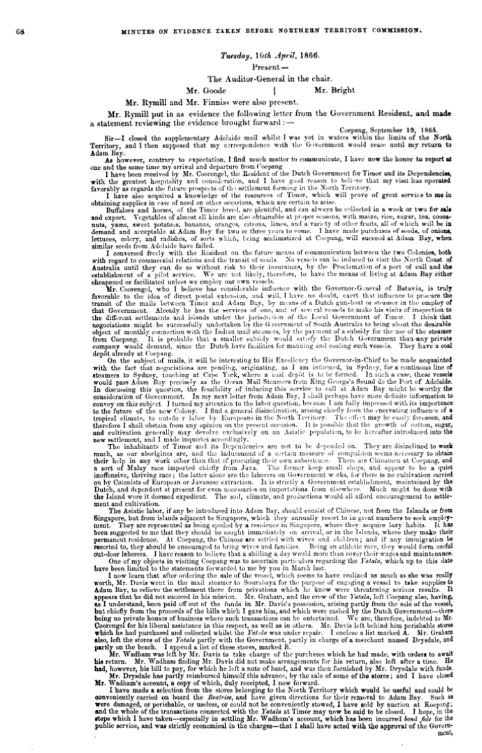 Vessel History On the 17 January following the wrecking of the Calliance at Camden Harbour, the ship’s cutter set out for Koepang in Timor to try to procure a vessel to collect the Calliance survivors. The cutter, under the command of the second officer, Mr Clark, with Captain Edwards (one of the settlers) and three crewmen, reached Timor in five days. At the request of the Governor of Timor, a small schooner, described as a Dutch gunboat, was loaned to the party by a Mr [Thomas Cochran] Drysdale of Koepang, (Journal of Trevarton Sholl, 17 February 1865, Acc. No. QB/SHO, Battye Library). The two boats then got under weigh on the return voyage. About 130 kms out from Camden Sound on the morning of 8 February, a heavy squall struck and upset both the schooner and the cutter, which had been sailing a little behind. There are two accounts of the foundering that vary slightly. The newspaper report below is purported as a first-hand account of one of the crew:

After considerable damage and many difficulties we arrived at Cupan in Timor, and succeeded in hiring a schooner, and in her we started back to Camden, towing the boat that had conveyed us to Cupan. After we had been at sea six days, Mr. Clark requested me to, take charge of the boat in tow, accordingly I did so, having one sailor with me; the morning after I found I was about 1.5 miles from the schooner. Mr. Clark signaled me, and I ran down towards him. I observed that Mr. Clark endeavored three times to put the schooner about, but he could not succeed. I then ordered my mate to reef our boat down, but, before we could finish a squall struck it and capsized it; we were thrown into the water, but, after determined efforts, we reached the boat, which was bottom upwards, and clung to it; my companion was before me, but, I lifted him behind me, as I considered myself to be the better swimmer of the two; we remained thus for about 3 1/2 hours. I, at last, stood up on the keel, and looked around me, to see if any assistance was coming, when, to my dismay, I found that the schooner had also capsized. I then dived below the boat and discharged the chains which were foul. I dived a second time, cut the rigging away and set the masts afloat, and thus righted the boat, into which we clambered and after much difficulty reached the schooner, which we found with her bow only out of the water and four men clinging to it. We took them on board the boat. Understanding that Captain Edward was below, I dived down and fetched him up; he was quite dead. We then rigged the boat and started off for Champagne Island, in order to bury Captain Edward, but the natives were hostile and would not allow us, we were therefore, compelled to launch him into the sea (Perth Gazette & WA Times 05/05/1865).
continued

The second account is contained in the journal of Trevarton Sholl. Here the survivors of the capsized vessel are said to have collected a bundle of hats and cocoa nuts that floated from the hold of the schooner, the latter from which they then subsisted:  They lived on the cocoa nuts, using milk for water, until they got to New Island—off Camden Harbour—where they arrived three days after, and got water. They intended burying the Captain there, but the natives came down and they were obliged to put off as they had no arms, they then had to throw the body overboard as it would not keep longer, and they all got into harbour all safe (Journal of Trevarton Sholl Acc. No. QB/SHO, Battye Library; Henderson, G & Henderson, K.J. 1988:59).The Dutch gunboat was a wooden schooner built in Indonesia. Details regarding the dimensions of the vessel are not known. The wreck site has not been located.

....... I now learn that after ordering the sale of the vessel which seems to have realized as much as she was really worth Mr Davis went in the mail steamer to Surabaya for the purpose of engaging a vessel to take supplies to Adam Bay to relieve the settlement there from privations which he knew were threatening serious results It appears that be did not succeed in his mission Mr Graham and the crew of the Yalala left Koepang also having O as I understand been paid off out of the funds in Mr Davis's possession arising partly from the sale of the vessel but chiefly from the proceeds of the bills which I gave him and which were cashed by the Dutch Government there being no private houses of business where such transactions can be entertained We arc therefore indebted to Mr Coorengel for his liberal assistance in this respect as well as in others Mr Davis left behind him perishable stores which o had purchased and collected whilst the Yalala was under repair I enclose a list marked A Mr Graham also left the stores of the Yalala partly with the Government partly in charge of a merchant named Drysdale and partly on the beach I append a list of these stores marked B. Mr Wadham was left by Mr Davis to take charge of the purchases which he had made with orders to await his return. Mr Vadham finding Mr Davis did not make arrangements for his return also left after a time. He had however his bill to pay for which he left n note of hand and was then furnished by Mr Drysdale with fund Mr Drysdale has partly reimbursed himself this advance by tho sale of some of the stores and I have closed Mr Wadham's account a copy of which duly receipted I now forward I have made a selection from the stores belonging to the North Territory which would be useful and could be conveniently carried on board the Beatrice and have given directions for their removal to Adam Bay .Such were damaged or perishable or useless or could not be conveniently stowed I have sold by auction at Koepang and the whole of the transactions connected with the Yalala at Timor may now be said to be closed I hope in the steps which I have taken especially in settling Mr Wadham's account which has been incurred bond _ ode for the public service and was strictly economical in the charges that I shall have acted with the approval of the Government ......

...Mr. Coorengel , who I believe has considerable influence with the Governor General of Batavia is truly favorable to the idea of direct postal extension and will I have no doubt exert that influence to procure the transit of the mails between Timor and Adam Bay by means of a Dutch gun boat or steamer in the employ of that Government Already he has the services of one and of Several vessels to make his visits of inspection to the different settlements and islands under the jurisdiction of the Local Government of Timor think that negotiations mi ht be successfully undertaken by the Government of South Australia to bring about the desirable object of money connection with the Indian mail steamers by the payment of a subsidy for the use of the steamer from Koepang It is probable that a smaller subsidy won d satisfy the Dutch Government than any private company would demand since the Dutch have facilities for manning and coaling such vessels They have a coal depot already at Koepang.......