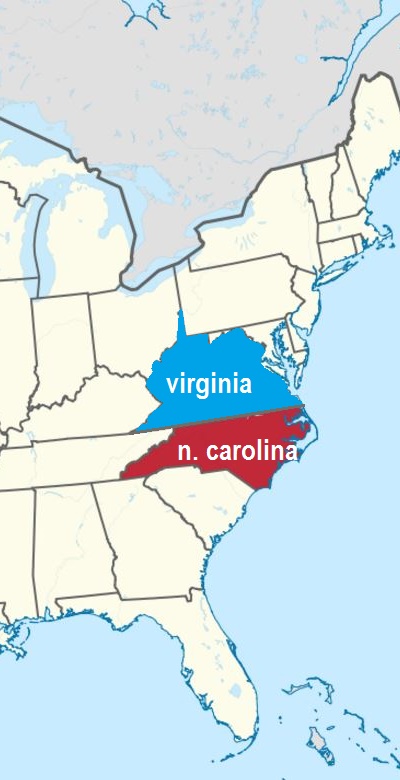 Just a copy paste of info here for those looking for their folks in Albemarle County ....

Albemarle County North Carolina
The county was named for George Monck, 1st Duke of Albemarle By 1670, four precincts of Albemarle County had been formed: Shaftesbury, Currituck, Pasquotank, and Berkeley. In 1681, Berkeley was renamed Perquimans, and by 1685 Shaftesbury became Chowan.
By 1689 the county ceased to function as a governmental unit, replaced by the four "precincts" (which would later become counties themselves)
Shaftesbury, Currituck, Pasquotank, and Perquimans counties.'' the region's reputation as a haven for ne'er-do-wells of all sorts, provoked insulting epithets from Albemarle's Virginia neighbors, the most popular being "Rogue's Harbor."

Albemarle County , Virginia
The county was named in honor of Willem Anne van Keppel, 2nd Earl of Albemarle
Albemarle County was created in 1744 from the western portion of Goochland County, though portions of Albemarle were later carved out to create other counties.
A few of the notable residents were
Thomas Jefferson [president]
James Monroe [president]
James Monroe [senator]

Both covered large areas that were later in both cases divided up . There is a remainder of Albemarle county in existence today in Virginia, its county seat is Charlottesville, Virginia

From what I gather Albemarle County did not exist in Virginia until 1744,  In North Carolina Albemarle county was abolished by 1739.

For further reading on both  ;

changes you may not have thought of .