My Gt-Gt-Grandfather was Hugh Douglas.  He was born in Glasserton, Wigton in 1814.  The family story goes that he was a piper at Culzean Castle.  This is probably correct as the person who told me (now deceased) gave me his name and the person he married but was unaware where he fitted into the picture as far as ancesters go.

I managed to trace the marriage entry from Register House, Edinburgh  Hugh Douglas and his wife, Helen Gray were married at Tarbolton, Ayrshire by the Minister of Stair Church in 1836.

I have been unable to trace his or his wife's death or where they died.

Some time ago while visiting Culzean Castle, I mentioned to the guide and she said that he must have been related to the Kennedys, because the piper would not have been an outsider to the family.  I found this interesting and started to look for a connection.

Two families I have looked at are the descendants of Sir William Douglas of Castle Douglas but he died unmarried.  Most of his siblings and their families seem to have gone abroad or down South and not to have stayed in Scotland.  The other family I have recently looked into was William Douglas died 1753 and his wife Sarah McHarg who are buried at Penningham Church.

The interesting thing is that Sir William was born in Glasserton too and his family stated that they were Black Douglases descended from Gilbert Douglas, the Covenanter, and further back descended from a relative of Archibald the Grim.  My mother's family Douglas maintained also that they were Black Douglases and I was always under the impression that the family were descended directly from 'the Good' Sir James.

Can anyone help with my research or have any clues on any of the above information?  I would be very grateful for any assistance.

Easter and Wester Balscaloch lie on the The Rhins of Galloway, otherwise known as the Rhins of Wigtownshire, the hammer-head peninsula in Dumfries and Gallowa. Stretching more than 25 miles from north to south, its southern tip is the Mull of Galloway, the southernmost point of Scotland.

Could this be the same place as 'Balsalloch?

So, not the same as the above. 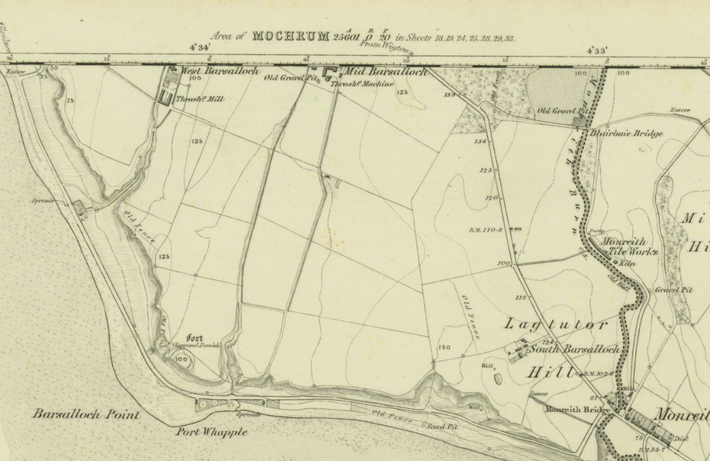 On a point of interest, I'm sure you will find Sir William Douglas was born in the parish of Penninghame, as opposed to the parish of Glasserton. The farm where he is reputed to have been born in 1745 was 'Balsalloch', on the Moss of Cree, which lies between Newton Stewart and Wigtown.  His great grandparents are recorded as being Gilbert Douglas and Margaret McIlroy/Milroy, in the farm of 'Glenrassie', also in Penninghame.  Gilbert did indeed fight at the Battle of Bothwell Brig, where his side was routed and following which he later suffered greatly at the hands of the victorious army.

I have not been able to form a link between Gilbert (1648) and William (1679) but going by dates, the former may have been his uncle.

Both of the above families claimed to have been related to the Black Douglas.

Unfortunately, I have not yet found a Hugh Douglas within these families but hope the foregoing goes a little way to assist.

Thank you William for your comments and ideas.

I was aware of the Stewart family owing the Glasserton Estate, not much else though.

The fact that there could be an Irish connection is interesting.  The dates of John Douglas born around 1831 in Ireland doen't correspond to any of the family since Hugh Douglas.  I have all the family members since Hugh's birth in 1814 to date but no idea who his parents were.  The name John maybe significant, though, and may have been a relative.  Both my grandfather and gt-grandfather were named John, as was my uncle and some of my cousins.  Worth looking into - could be a connection to an earlier generation.

I had come across a mention of John Douglas involved with the rebuilding of Glasserton House but my instinct was to rule him out, as I had the thought that Hugh's family would be involved with farming or at least involved in the estate with horses as my family of Douglases were for four generations Blacksmiths.

Gilbert Douglas, who was a covenanter, fought and was captured at Bothwell Bridge.  He was born in 1648 and farmed at Glenrassie.  Gilbert is not a family name in our Douglases but I found a mention somewhere that he could have a half brother named William married to an Isobel Kennedy.  This maybe the Kennedy connection but goes back quite far to be connected to Hugh.

I will keep researching and perhaps I will come up with a lead eventually!

A John Douglas was involved in the re-building of Glasserton House.

By 1851, John Douglas born abt. 1831 in Ireland, was working there as a farm labourer, and with his wife Martha, raised 8 children, all born in Glasserton.

None of which answers your question, but I hope it adds a few clues.