Not to be confused with Drysdale

The name Truesdale is of English origin and is said to have been derived from the residence of its first bearer at a placed called Troutsdale in the North Riding of Yorkshire, England. In the ancient records, it is found in many different forms: Troutsdale, Truesdell, Trewsdell, etc., down to the generally accepted ones in America as Truesdell, Truesdel and Truesdale.

The following account of the Truesdale family is partly taken from an old letter written by James Truesdale of New York (Samuel Truesdale settled in New York) to his cousin, Jesse Truesdale of Flat Rock, SC:

Our Truesdale forefathers came from England in the year 1649 with Oliver Cromwell, who came with an army of 12,000 men to subdue the Papists that were in rebellion against the British government. They were also murdering the Protestants throughout Ireland. The Papists had made a stand at a place called Drogheda with a large army, it being a walled town and Oliver Cromwell laid siege to it and took it and put 2000 of the Papists to the sword.

Our forefathers fought there and when Oliver had captured the place he left a garrison in it and went to the city of Wetford. Our forefathers were left at Drogheda with the garrison. When Cromwell had completed his mission in Ireland and peace being restored, the Truesdales and Hollingsworths settled somewhere about Drogheda. How long our forefathers remained there I cannot exactly tell, but sometime in the year 1700 a family of the Truesdale's and a family of the Hollingsworth's left their friends somewhere in the neighborhood of Drogheda and came to the province of Ulster county of Down and town of Rothfreland and settled there where there is a number of their offspring. They reside there to this day. 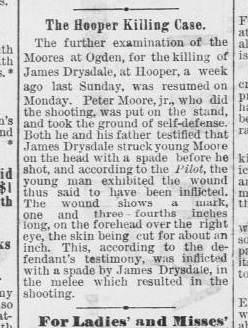 Before anyone jumps off a cliff here - The reason for bringing this issue to light  is not to elevate one family name over another , make less of any single person, but rather point out that unpaid volunteers -are human and do make mistakes, yes even Mormons.

January 15, 1878
Tuesday 15 Jany 1878.
aching wrote to P M-
Killin desiring to leave the
names of the parishes in
that locality with a view
to going to Edinburgh to
[page 121]
121
to get genealogies. Still
raining

Drysdale. Born Nov. 14% 1830
in the parish of Drungullan
Town of County
Down. Ireland. the above
Mary Drysdale died
May 1873 a faithful saint