Sir William Douglas, Lord of Liddesdale, the Flower of Chivalry. Sir William Douglas, Lord of Liddesdale (circa. 1300-k.1353) was also known as the Knight of Liddesdale and the Flower of Chivalry. He was a Scottish nobleman and soldier active during the Second War of Scottish…

Of, in or at a place

The following helpful guide was contributed by the late Norman Douglas of Dundarroch to a Clan Douglas Association of Australia newsletter some years ago. It bears reprinting.

When searching through records or gravestones in Scotland, it is common to find a person described either 'of', a place or 'in' a place or 'at' a place. These words are of considerable… 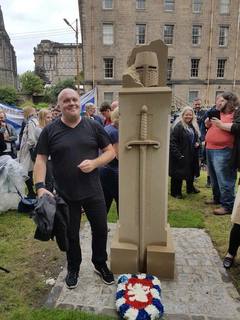 Several of the illustrations used in the Douglas Archives were created by Andrew Hillhouse, who died on Sunday 16th April 2018.

Andrew worked as a technician in the School of Landscape Architecture, ESALA, Edinburgh University. He drew, painted and illustrated in his spare time depicting, predominantly but not exclusively, various periods of Scottish…

During a recent short holiday in Seville, I did not expect to see evidence of 'The good' Sir James Douglas, who passed through the city when en-route to the Holy Land, in 1330. As a consequence, I failed to do my research before arriving.

When he was commissioned by the dying King, Robert 'The Bruce', to carry his heart on crusade to the Holy Land, James Douglas gathered around him several noble knights and twenty esquires, among them a son of Sir Roger Kirkpatrick of Closeburn. The…

Satirical cartoon showing Sir John and Lady Douglas being led to the pillory outside Montagu House, Blackheath, after being discredited in giving evidence against Queen Caroline. 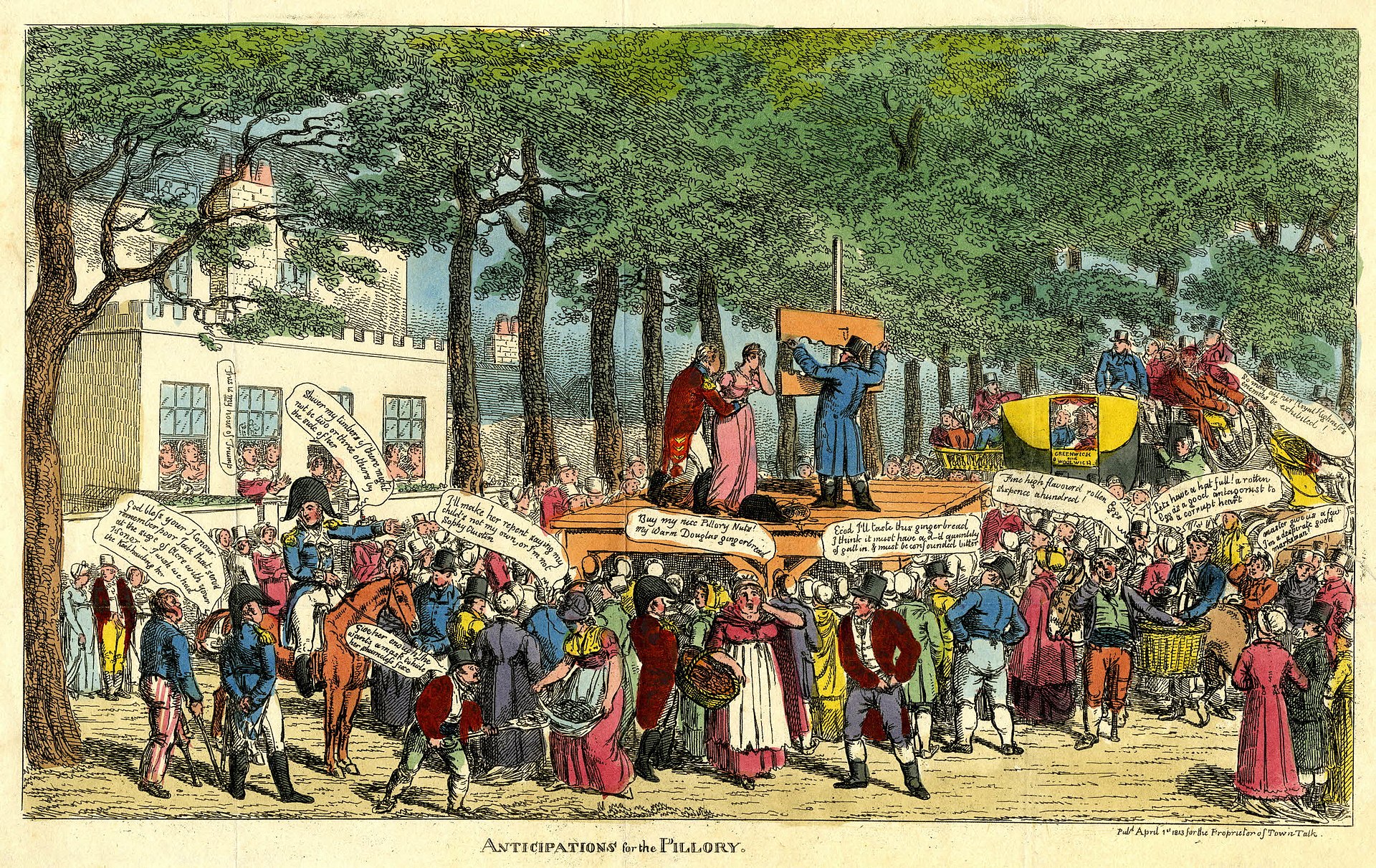 We offer our congratulations to the following on their appointments: 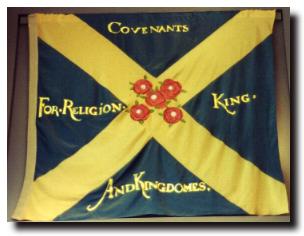 On 10th December 1679, 210 Covenanter prisoners in the Greyfriars Prison destined, with others from the tolbooths, were being transported on board the ill-fated "Crown", which sank off Deerness in the Orkney Isles. Over 200 were drowned.

In 1679, after the Scottish Covenanters' uprising was quashed at the Battle of Bothwell Brig, 1184 prisoners were captured after the…

Experts are examining carvings on an old wooden chair that shows evidence of having been immersed in sea water for some time.

The seat is stored in the Am Fasgadh building at the Highland Folk Museum in Newtonmore in the Cairngorms.

Thought to date from the 17th or 18th Century, it was given to the museum by a donor from Edinburgh.

Who is the earliest recorded Douglas?

There is a story circulating that while researching the Vatican archives for a book on the topography of Lowland Scotland, the author Nigel Tranter found a document which stated that John, son of William Lord of Douglas attended a royal council at Scone in 1056. This would be more than 100 years earlier than the previously accepted first Lord of Douglas.  At that time, Macbeth would have been king.

There is the following tradition in regard to the origin of the name. In…

Who was Grace Sholto Douglas?

Grace Sholto Douglas (1940) is a large painting by the British artist and set designer Leslie Hurry, which depicts a woman positioned semi-seated with her left arm resting on a stone architectural feature.

Although it is unclear where Grace Sholto Douglas was painted, it is known that Hurry first met the sitter during a concert in the National Gallery, London, in 1940. The image…

Who was Sarah Frances Douglas

William Crockford married Sarah Frances Douglas on 20th May 1812 by licence in the parish of St George, Hanover Square, London. He is registered as a bachelor and she as a spinster.

The Douglas family in Norfolk

I have been asked to help trace the Douglas family in Norfolk, East Anglia, particularly the name variants Dagles, Dagley, Daglis, Daglos, Duglasse.  As I have recently been working on the Palestinian variant Daghlas, this looked to be an interesting project.

And it is interesting and frustrating!

I have found a 15th century Richard Duglas, both Junior and…

Little boys should neither be seen nor heard? 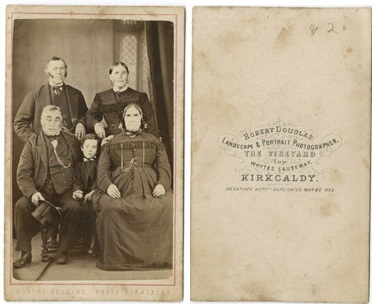 One wonders why the boy in this family group should have been given so little space if he was wanted in the photograph!
The carte de viste was taken by Robert Douglas, Landscape & Portrait Photographer, The Vineyard, Top Whytes Causeway, Kirkcaldy, probably in the 1860s.

Is the Daghlas family part of the extended Douglas family?

I have been asked by a Palestinian living in Jordan for help in identifying her ancestors. Her surname is Daghlas. The main centre of those with this name seem to be around Nablus - a troubled part of the world.

The name is also spelled Daghles; some appear to use both.

At this time died King Robert of Scotland, at a good old age. When he saw his end approaching, he summoned together all the chiefs and barons in whom he most confided, and, fter having told them that he should never get the better of this sickness, commanded them, upon their honour and loyalty, to keep and preserve faithfully and entire the kingdom for his son David, and to obey him ; also to crown him king when he was of a…
Continue

Two questions focus the minds of those who follow the fortunes of kilt-wearing Shoreditch hipsters. One, of course, is: 'What, if anything, do they wear underneath them?' The other, far more fascinating, is: 'Just who is Scott Douglas?' 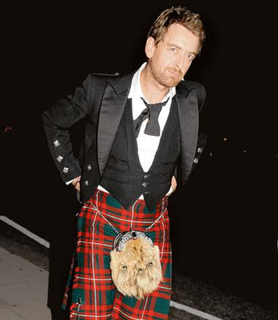 Until 2010, the flamboyantly Caledonian Casanova was Tracey Emin's long-term other half. Inevitably, they met at The Golden Heart… 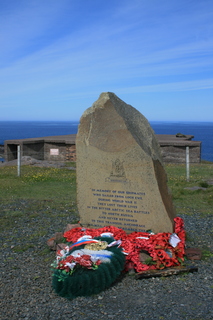 Visiting the Arctic Convoys memorial, in Wester Ross, I was reminded of the terrible conditions endured by both those in the protection warships, and those in the unarmed merchant ships carrying essential supplies to Russia.

About 1400 merchant ships delivered essential supplies to the Soviet Union under the Lend-Lease program, escorted by ships of the Royal Navy,…

I was researching the author, W. Sholto Douglas (Cromwell's Scotch Campaigns 1650-51, et al) when I stumbled across the remarkable story of Walter Sholto Douglas.

My first discovery was that there was a marriage between Walter Sholto Douglas and Isabella Robinson, who married secondly Rev. William Falconer.  Was this my historical author?

Well, maybe not, although she (wait for it) was a writer.

History of the House of Douglas

Oxfam, the international confederation of charitable organizations focused on the alleviation of global poverty, runs bookshops in the UK to raise funds for the charity.

They have on sale, via ebay, a copy of A history of the house of Douglas from the earliest times down to the legislative union of England and Scotland by Sir Herbert Eustace Maxwell. This 1903 two volume publication has…