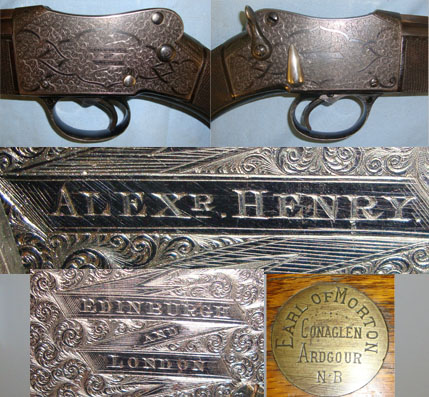 The title Earl of Morton was created in the Peerage of Scotland in 1458 for James Douglas of Dalkeith. Along with it, the title Lord Aberdour was granted. This latter title is the courtesy title for the eldest son and heir to the Earl of Morton. The family seat is Dalmahoy Farms, near Kirknewton, West Lothian.

Alexander Henry (1818-1894) was a Scottish gunsmith, based in Edinburgh, and designer of the Henry rifling and barrel used in the iconic Martini-Henry British Service rifle. In 1872 he was appointed "gun and rifle manufacturer to His Royal Highness the Prince of Wales".

This is a cased best quality Martini Action 577x540 calibre military calibre carbine by Alexander Henry once owned by the Earl of Morton most likely Sholto John Douglas, 18th Earl of Morton. The rifle has a 22" barrel (38 ½” overall). It has beautiful all original walnut full stock with polished horn fore end block, chequered panel fore end and wrist. The underside of the shoulder stock is inlaid with void brass disc. The steel butt plate, the whole of the action including the lever and trigger guard have best quality hand tooled foliate decoration. The right side of the action is crisply engraved 'Alexr Henry’ and the left ‘Edinburgh & London’. The lever is numbered ‘6050’. The top of the barrel rib has tooled decoration and 5 silver lined leaf sights graduated 100 to 500 yards. It has a silver dot blade foresight.

The rifle has sling swivel lugs and steel cleaning rod.

The weapon has a near mint bore, bright and clean with crisp rifling. It's loading and firing actions work as they should.

The weapon is contained in its period Oak transit case with hinged lid, lock (key absent), 2 sliding brass catches and leather carry handle. The edges of the case have reinforcing brass plates. The case has a brass disc set into the lid engraved ‘Earl Of Morton Conaglen Ardgour NB’. The case is lined with green felt and the inside of the lid has a ‘Westley Richards’ trade label. The inside of the case is contoured to fit the rifle and it's accessories which include a glass oil bottle with brass screw top lid which has an integral oil applicator. The lid has a stylised monogram, an ebony handled steel cleaning rod. A 2 piece leather strap or sling with brass buckles and a single inert deactivated 577x450 round of ammunition by Kynoch.

As an obsolete calibre black powder weapon no licence is required to own this item in the UK if retained as part of a collection or display.