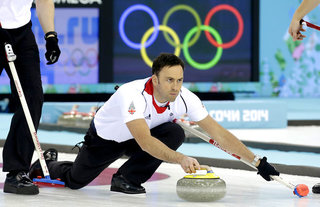 With worldwide interest in the sport following the 2014 Winter Olympics in Sochi, it seemed appropriate to print this extract from John Kerr's book 'The History of Curling', published by David Douglas in Edinburgh in 1890.

In a poem* written by Captain Paterson about the beginning of this century are duly celebrated the deeds of Thomas Haddow (who is said to have been the prototype of Lazarus Powhead in Scott’s Castle Dangerous), and of other ancient worthies among the curlers “of that loved place called Douglasdale.” Skipper Tam (Haddow) draws the broughs with "knife and string".

Another hero is described as glancing up the rink "With stone in hand and foot in natch
In attitude of dire despatch ;”

while of Bailie Hamilton it is said:

"A better drawer ne’er clapped foot in natch ;
He once, near Bothwell Brig, with dext’rous cunning,
Drew through a ten inch port for three times running ;
The rink in length was forty yards and nine,
As measured by Tom Haddow with his line ;
And when the stone they in the port did place,
On neither side was there an inch of space ;
The ice in length was forty-two yards good,
Down from the pass to where the bailie stood ;
The plaudits loud from lookers-on and all
Alarmed The Douglas’ in his castle hall’
Darkness descends on the players,
and when “ the fun ” is thus ended,
Reluctantly they think upon their homes,
And now in Flecky’s barn they lodge their stones ;
Then future matches n1ade--wi’ muckle sorrow
They all depart, resolved to meet to-morrow.”