Organisers today hailed the weekend's huge clan gathering a success, after almost 50,000 people flocked to Holyrood Park from all corners of the world.
Clan chiefs, ex-pat Scots and curious locals were among those soaking up the atmosphere – and occasional sun – yesterday on the second day of Homecoming centrepiece The Gathering.

And organisers hope the event will become a regular fixture as the economic benefits have surpassed expectations.

A total of 47,000 people attended over the two days. Most came on Saturday, when 30,000 enjoyed the sunshine, while the rain put off some visitors yesterday.

Around 20,000 people lined the Royal Mile on Saturday night to watch thousands of people and pipe bands march up to Edinburgh Castle, before a performance celebrating Scotland's history.

Lord Sempill, the co-director of the Gathering, said: "This tremendous event has not only been everything I dreamed but has exceeded my expectations. It has been wonderful to see so many local people." Talking to Jim Jacobs, and referring to the march to the castle, he commented that there had been a special "Douglas moment" - but it passed me by! Could he have been referring to the man in the crowd who shouted out "Are yous from the isle of Man?"

The parade was to be led by the Lonach Highland Pipe Band with members of 124 clans following, a sizeable proportion of them coming from the diaspora, particularly North America, Australia and New Zealand. One participant commented: "The parade was absolutely stunning, and the atmosphere at the castle was amazing." Reaction to the performance of Aisling's Children: Tales Of The Homecoming on the Castle esplanade was rather less warm, many hoping for more tartan and music.

Highlights of yesterday's events included a tossing the caber competition, a race around Arthur's Seat, dancing demonstrations and the Pipe Idol competition,including the Red Hot Chilli Pipers, the Battlefield Band and the Lothian Gaelic Choir. Many visitors dressed in traditional costumes, with kilts and tartan skirts and dresses on display. Dozens of clan chiefs welcomed relatives at the "clan village" in the park.

Nathalie Coriton, 38, a teacher from France who now lives in Prestonpans: "I've been here for ten years and I really love Scotland. We've really enjoyed looking round the clan village."

Deva Gallagher, 30, a full-time mum from Gorgie, said: "We loved the music, especially Capercaillie, and the Highland Games. It's a shame there's been a bit of rain, but the weather was actually better than we expected."

Many Douglases signed the book in the Douglas tent to record their visit, some renwewing previous contacts, some making their first contact. Several brought copies of their family tree to share with us, and made contacts that they will use to further their research. 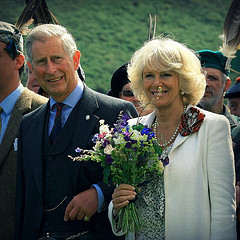 Oh Yes! And we can reveal that Jim Jacobs, President of the Clan Douglas Society of North America, was indeed with royalty yesterday, chatting to HRH The Duke of Rothesay, perhaps better known as Princes Charles.

47,000
The number of people who came through the gates to watch the Highland Games in Holyrood Park

20,000
Estimated crowd that lined the Royal Mile to watch the parade of clan members on Saturday.

124
Number of clans and societies represented at The Gathering over the weekend.

200
Number of performers to take part in Aisling's Children, the pageant staged on the Esplanade of Edinburgh Castle.

400
Number of participants in the official Highland Dancing competition.

Comment by William Douglas on August 8, 2009 at 18:26
There are now a couple of video clips of the Clan Parade up the Royal Mile in our newly added video section.