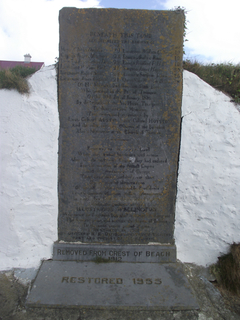 Troops, and their families, returning from Belgium and France after the Battle of Waterloo were caught up in a fierce storm, and three ships sank with huge loss of life.

The Sea Horse was carrying members of the 59th Regiment of Foot, amongst them Major Charles Douglas.

It occurred in the day-time; the shore was crowded with people, who were aware of the inevitable fate of the crew, and had no possible means of relieving them. As the vessel neared the shore, those on board were distinctly seen, awaiting in agony the dreadful catastrophe. Husbands and wives, parents and children, (there were many women and infants in the ship,) were plainly observed in some few instances encouraging each other, but for the most part clinging to the timbers, or folding their arms round those they loved, that they might die together. Their anticipations were but too well founded: the vessel struck and went to pieces, when two hundred and ninety-two men, and seventy-one women and children, perished in sight of the assembled thousands.

It is intended to commemorate this tragic event in 2016, and details are now being sought of those connected with the disaster, particularly those listed on the memorial stone.

Major Charles Douglas reputedly was in command of the 59th in 1816, when they returned to Ireland, where the Regiment had been based before being ordered to war.

The memorial in Tramore states that he was 29 when he died, so he would have been born about 1787.

Charles' grandfather, Charles Douglas of Holmhill, worked for the Duke of Buccleugh, but his children were born in several different locations, including Spittal, which is to the south of Edinburgh, which is where Charles' father, a Captain in the 103rd Regt of Foot, William, was born. He, however, is described as being 'of Leixlip, Co Kildare, Ireland'.

Charles' elder sister, Harriet, was born in Dublin, so there is a possibility Charles was too.

My records show that Major Charles Douglas died unmarried, so there are no descendants. But are there any distant relatives who might be able to represent the family, or who can provide additional information?