In 2008, Quebec City commemorated 400 years from its founding. Our daughter was living in Montreal at the time. With my partner we took the opportunity and time to visit both our daughter in Montreal, and the City of Quebec.

Having done some family research I understood that there were more than one Douglas family branches with history in the Eastern Townships (the area south and east of Montreal to the border with the USA). I spent some time traveling to locations on both the (Quebec) Lavallee side of my family as well as the Douglas side.  Somewhere near the intersection of Routes 217 and 221 there was supposed to be an old cemetery (Burtonville) with a number of Douglas burials. Church and other records indicated that some of my ancestors were amongst them.

Regrettably time was short and I was without a proper guide. I did not locate the site (no GPS for me then, but now see http://www.leslabelle.com/cimetieres/AfficherCim.asp?MP=E3&CID=618). As I paused on the roadside to determine my next course of action I looked up to see a large motel facility across the highway. The Resto-Bar le Douglas http://motelresto-barledouglas.ca

The local road is Mon 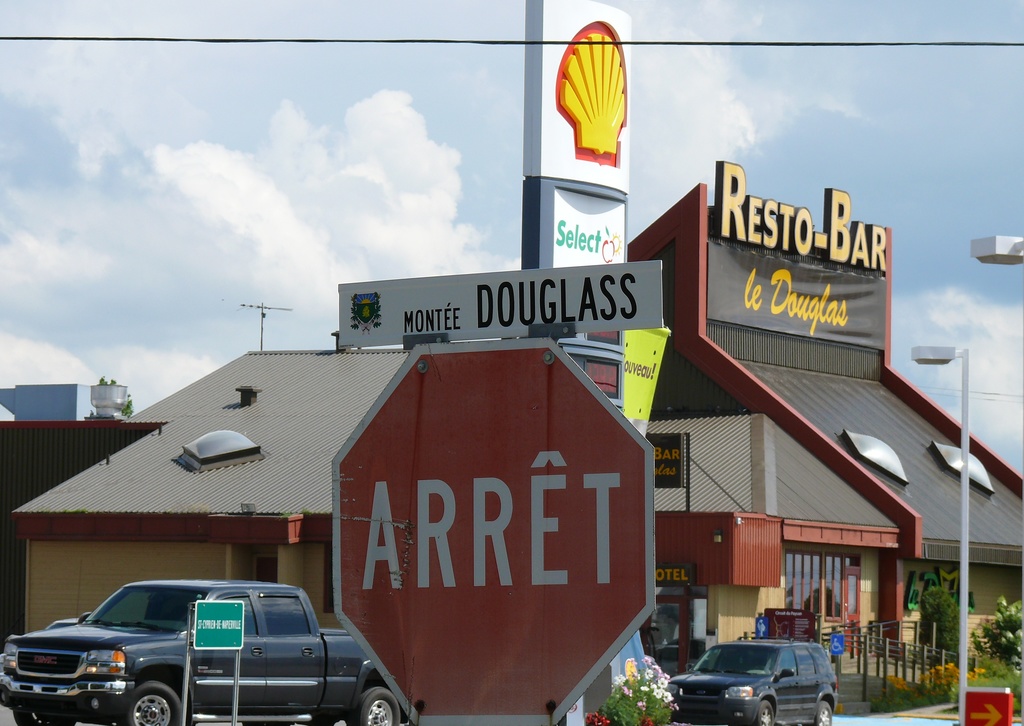 "It was around 1820 that the Douglas family built a hotel serving as a relay for diligences between Montreal and the United States where it became known as "Douglas Corner". This hotel became a center for the distribution of mail.
During the revolution of the patriotes in 1837, the hotel was used as headquarters for the army."

You'll have to read up on your Canadian history to understand who the patriotes are. Presumably, the army referred to would have been the British, though I could be wrong. The British forces conducted a considerable 'police' action to crush the budding revolution, and burned numerous homes and villages, and compelled many to flee or go into exile. That process may sound familiar to some, I'm sure...

I am not certain that the Douglas who started the original hotel on this site is an ancestor of mine. They family does seem to have been in the area and part of the merchant caste though, so maybe. I know my GGGrandfather Robert Douglas was born in this area (St.Thomas) in 1824 and is buried in the nearby Burtonville (Lacolle) cemetery with his wife (Mara Foster) and some short-lived grandchildren. In an 1861 Canada census record Robert claims his father was also born in Quebec, which would put that Douglas (my GGGGF) present in NA by 1800 or earlier. (Was this the hotelier? And, from where did they arrive: direct from Scotland? via England or Ireland?, via America or the Caribbean? or some combination of these?) I also know that GGGF Robert ran a grocery store in nearby St-Jean for most of his adult life (d.1897). Robert's son David Walter Douglas (b. in Lacolle) was also a merchant/importer and traveled often. They followed a strong naming tradition with eldest sons alternating between Robert and David. So we have, Robert (b.1824); David (b.1855); Robert (b.1895); David (b.1920) - my father; and Robert (b.1946) - my oldest brother.

Let me know if you find this of any interest.

The building so easily could have a big M over it or similar, so it is good to see the current owners keeping the link with the past.

There are several references to Montreal in the Douglas Archives.  You can find these by using the search function: http://www.douglashistory.co.uk/history/Forms/advancedsearch.htm  However, I was unable to locate any reference to your article's background.

I have recently added an article on Fort Douglas which does not relate closely, but may be of interest.