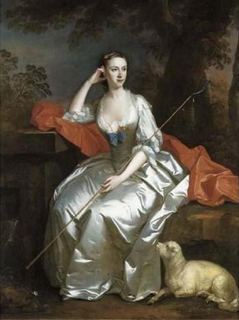 I have received an interesting inquiry:
I am descended from a man named Henry Downs, of England, whose wife was named Jane Douglas. They were born in the late 1600s. Jane was said to be from Castle Douglas, Scotland. Family lore states that Jane may have been banished from the family for marrying Downs. I am looking for information about this couple, and would greatly appreciate any help you can give.

Elsewhere, it is said that:
Lady Jane Douglas was of the house of Douglas in Scotland and may have eloped with Henry Downs and ran away to America.

Henry Downs has been described as a 'Gentleman', as a 'British sea captain' and as the 'builder', Sir Henry Downs, who was at Douglas Castle (not Castle Douglas) to make repairs when he met and fell in love with Lady Jane Douglas. The match was supposedly opposed, so she eloped. The story continues that when the estate of Richard Douglas, a Charleston merchant, made a loan of £500,000 to the South Carolina forces during the war, the funds were provided by Lady Jane, though whether an eloping girl could take those sorts of funds with her is doubtful.

It is thought that Henry and Jane married in about 1715, an interesting year in the history of Douglas Castle.

Archibald, Duke of Douglas, 1694-1761 became involved in the civil wars that were caused by the dynastic rivalries of the houses of Hanover and Stuart in the eighteenth century. During the Jacobite rebellion of 1715 he sided with the Hanoverian government and mustered 300 of his men at Douglas Castle to join the Duke of Argyll. However lack of provisions meant that they could not depart.

The succession of the Duke of Douglas was a hotly contested action, giving rise to the 'Douglas cause', discussed elsewhere about another Lady Jane Douglas.

A third Lady Jane Douglas of about that time who surfaces is thought to have married an Andrew Martin, son of Sir Thomas Martin.

The portrait (above) of Lady Jane Douglas is, in the book The DOWNES or DOWNS FAMILY GENEALOGY, associated with Henry Down's wife, but there must be some doubt about that.  Painted by the prominent Scottish portrait-painter, Allan Ramsay (1713-1784) Lady Jane Douglas is depicted as a shepherdess seated in a landscape.  The young woman is probably around 20 years old, and Ramsay would have had to paint that whilst still in nappies (diapers).

I have a note of Henry and Jane's parents, which is incorrect, but repeat it so that others might be aware.

James Douglas, 2nd Marquess of Douglas was born in 1646. He was the son of Archibald Douglas, Earl of Angus and Lady Anne Stuart. He married by contract, firstly, Lady Barbara Erskine, daughter of John Erskine, 21st/4th Earl of Mar and Jean Mackenzie, on 7 September 1670. He married by contract, secondly, Lady Mary Kerr, daughter of Robert Kerr, 1st Marquess of Lothian and Lady Jean Campbell, on 13 December 1692 at Newbattle Abbey, Newbattle, Scotland. James died on 25 February 1699/0 at Douglas, Scotland and was buried there on 1 March 1699/0.

James and Mary had two sons and a daughter, Lady Jane. This is the Lady Jane of the portrait and Lady Jane Douglas of The Douglas Cause. She was born on 17 March 1698 at Douglas. She married Sir John Stewart of Grandtully, 3rd Bt., son of Sir Thomas Stewart of Balcaskie, 1st Bt. and Lady Jean Mackenzie, on 4 August 1746 in a secret marriage. She died on 22 November 1753 at age 55 at Edinburgh, Midlothian, Scotland.

So, we are no nearer knowing if Henry Downs's wife was a Lady, nor who her parents were.

The Jane Douglas Chapter, National Society Daughters of the American Revolution, in Dallas, Texas is named for Mrs Henry Downs

Note that the painting has been suggested to be Mrs Downs, but is lady Jane Douglas of Glamis Castle - and that is another good story.