How many swords did the Good Sir James Douglas own? 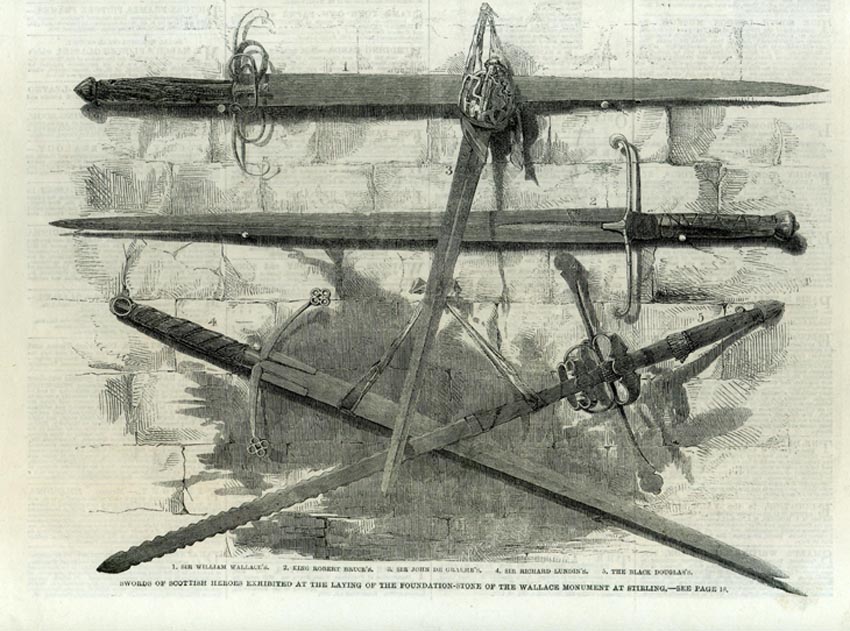 On 21st June 1861, the anniversary of the Battle of Bannockburn, the master gunner of Dumbarton Castle carried William Wallace’s sword to the laying of the foundation stone at the Wallace Monument, while a servant of the Earl of Elgin carried King Robert Bruce’s sword. Up to 100,000 people are said to have attended.

Other historical swords in the procession included that of the Laird of Lundin which had been reputedly used at the Battle of Stirling Bridge, on 11th September 1297, that of Sir John de Grahame, and of the Black Douglas (with the serrated edge). Sword No 1.

Sword No 2 is the sword said to have been carried by Sir James when he took Robert the Bruce's heart to the Holy Land, only to be killed in Spain in the battle at Teba, in 1330. The pommel and blade both belong to the late C13 to mid C14th, so is from the time. There is a bit of a conundrum about this sword as it may feature a small heart, (or is it a blemish?) which was only taken into use by the Douglas family after James's death. There seems to be no record of the sword being recovered, but if his heart could brought home, why not his sword? This sword appears not to be the one in the exhibition.

Sword No 3, is among other tokens of love and esteem for his noble subject, believed to have been given by King Robert the Bruce on his deathbed to Sir James. The sword, which is about three feet long and an inch and a half broad at the hilt, and was probably not a weapon used in warfare, but a sword of State. It existed in 1885 among the heirlooms of Douglas Castle. On one side of the blade is the engraving of a heart, to which two hands point, over the one hand being the letters K. K. B., and over the other the letters I. L. D. On the other side of the blade are depicted within a shield the royal arms of Scotland, the lion rampant within the double tressure. The shield is surmounted by a crown. The following legend is also inscribed on the two sides of the weapon :
—
" So mony gvid as of the Dovglas beine, Of ane svrname, wer never in Scotland seine.
I wil ye charge, efter that I depart,
To Holy gravfe, and thair bvry my hart:
Let it remane ever, bothe tyme and hovr, To the last day I sie my Saviovr.
So I protest in tyme of al my ringe, Ye lyk subiectis had never ony keing."

This relic was nearly lost to the family on the occasion of the rebellion of 1745, as in their retreat from Preston the followers of Prince Charles Edward took up their quarters for a time in Douglas Castle, and carried the sword away with them when they left. Only after some troublesome negotiations with the rebel leaders, was the sword recovered and replaced in the castle by the Duke of Douglas. This sword also appears not to be the one in the exhibition.

So, are there three Black Douglas swords? And where are they now?