Is a Douglas Fir the only choice? 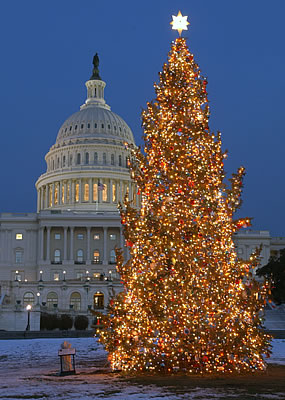 'Tis the season when many people purchase decorative conifer trees; otherwise they own some ersatz version thereof. No option exists in our household because we are of the most firm opinion that only a natural tree will do.

On an ecological basis cut conifers are grown as a crop and can be fully recycled. So here is your holiday conifer primer. 1. Evergreen is not synonymous with "pine tree" or "conifer". 2. The vast majority of trees sold this time of year are firs, douglas-firs, or pines, and these are three different genera (Abies, Pseudotsuga, and Pinus respectively). 3. Douglas-fir is not a true fir, but most confusingly it's also called Oregon pine and Douglas spruce. See the problem with common names?

Here's how you tell these three genera apart. One pines needles are in clusters or bundles of 2, 3, or 5. The other genera have needles borne singly upon the twigs. The common pine species sold as cut trees have two (Scotch) or 5 needles (white pine). Firs and Douglas-firs have different buds at the end of twigs. Firs have resinous buds, that is coated in resin, and rounded in shape. Douglas-firs are smooth, dry, and conical. Distinguishing among the various species of firs is too tricky for verbal descriptions.

Although the Douglas fir might still rank as one of the most popular trees to load Christmas gifts under, the species has become increasingly difficult to care for and a new unidentified threat has some growers especially concerned.

Douglases have traditionally been plagued by three archenemies: two different types fungal diseases known as “needle casts” that cause needle loss, and phytophthora — also called root rot — which is exacerbated by wet weather.

Because 2011 was so wet, the root rot has been particularly troublesome for Douglas firs.

To fight these threats, tree farmers have to spray their trees down weekly, sometimes starting the laborious and expensive process as early as May.

While healthy Douglas firs are still available at most farms, the species remains the most vulnerable.