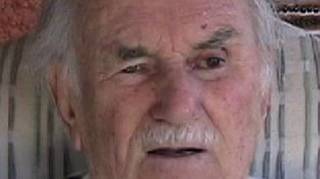 John spent the first seven years of his life in Brittany, France. A rich uncle paid for him to go to boarding school in England after his father ran off with the family maid. He never saw his father again.

At 17, he joined the Royal Navy and served as a frogman in the last year of the Second World War. He swam under ships and in harbours looking for mines and explosives.

He later recalled conditions in cities such as Bremerhaven, Germany, where the water was so polluted and filled with detritus from the war that he couldn’t see his hand in front of his mask and had to feel his way around.

After the war, he continued his diving activities in the Middle East, serving alongside Lionel (Buster) Crabb, who later caused an international incident after disappearing in mysterious circumstances under a Soviet ship in the 1950s.

In 1948, John emigrated to Canada, to Vancouver, with his fiancée Peggy Birkett, to escape the rationing and dreariness of postwar London. Neither of them knew a soul in Canada. They arrived with a couple of suitcases each.

John was unemployed for eight months, while Peggy got a job at the Vancouver General Hospital.

Eventually, John found employment pumping gas. He then was hired to set up window decorations for Imperial Tobacco. For the next 23 years, he moved up through the ranks at Imperial, eventually serving as vice-president and president of one of its subsidiaries, Editel Productions.

He had two sons, Rod and Pierre, and a daughter, Susan.

In the 1970s, John and Peggy divorced and he married Colette Potter.

After John retired in 1982, they divided their time bet ween Mexico and Vermont, where John built a 2,300-square-foot house by himself, including foundations, wiring, plumbing, roofing, kitchen cabinets.

When Puerto Vallarta grew too big for their liking, they moved inland to Ajijic, where John loved the climate and the expat Canadians and Americans he met. He did, however, admit to missing his scuba diving in the Pacific, including the solo night dives he occasionally made.

People who knew John were invariably impressed by his dynamism and zest for life. He loved entertaining friends with good wine and food. He was a garrulous, high-spirited individual, whose mantra could well have been carpe diem.

His Skype account contained the simple, heartfelt words, “Life is shorter than you think. Make the most of it.”