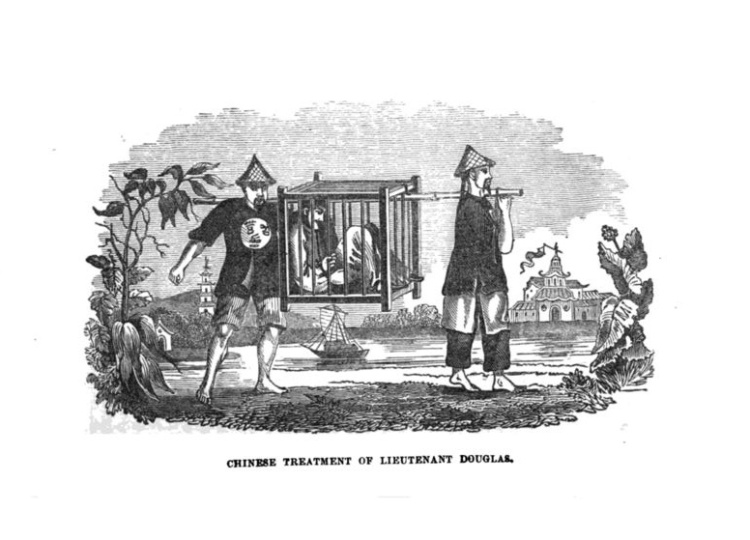 In September 1840, the Kite, a Government armed brig, was wrecked in the Gulf of Hang-chow-foo, and Mr. Noble, the Master, with his child and several of the crew, drowned. Lieutenant Douglas commanded the * Kite.' Lieutenant Douglas, Mrs. Noble, and others, who escaped from the wreck were made prisoners by the Chinese, and sent to Ningpo.
Who was Lt. Douglas?

Charles Douglas was the [acknowledged] illegitimate son of the Marquess of Queensbury, a fact clearly mentioned on his marriage certificate. Charles Douglas was something of a national hero following his conduct during his period of capture by the Chinese.

Extracts from The Asiatic journal ..., Volume 34

"The weather is cool and pleasant, but very damp. It, however, has rained for some days. The scenery is beautiful beyond anything I have ever seen, and the island is most richly cultivated; but John Chinaman thinks to starve us, and that is not pleasant. Since writing this, I am told that all the troops at present here are to continue at this place until after the winter.
"Parties, varying from 50 to 200 men, have been making frequent excursions in different directions for the purpose of discovering armed men, but have always failed. Two officers and four men on a foraging excursion were attacked, and with difficulty escaped: one Chinaman killed, and several others wounded in the affray. Capt. Anstruther, Madras artillery, was carried away prisoner to Ningpo whilst making a survey of the country; the wife and family of the captain since taken prisoners themselves. Sickness amongst the troops on the increase, and deaths more numerous. The wreck of the Indian Oak, off the Lew Chew Islands, crew and cargo saved; the natives there so kind, that on the Cruiser being sent to bring them back they refused to come, as the natives were building them a junk out of the wreck. The capture of 20 Europeans, one lady, and several Lascars at Ningpo, reported to belong to the brig Kite, since supposed to be the crew of some opium schooner wrecked; the assurances from the Ningpoites that they shall want for nothing, and that they shall be given up as soon as the island of Chusan is vacated. The arrival of the Madagascar from Pe-che-lee with intelligence that the Emperor is most anxious to treat, and offering Lantao in exchange for Chusan. This is all I can remember.
"Seven transports have been ordered to be in readiness for sea, and it is supposed two regiments will be sent to take possession of Lantao. Died this morning at 2 o'clock, on board the Mermaid, Capt. Stean, H. M's 49th regiment, aged 60, deeply regretted by his brother officers. Authentic intelligence has just arrived concerning the prisoners at Ningpo, that they are the crew of the Kite; Lieut. Douglas of the Royal Navy is amongst the number. Advices have come to the Admiral that one of the head mandarins will be at Canton on the 18th proximo, for the purpose of negociating, and it is supposed the Admiral will leave this for that place in a few days."
"September 30.
"It appears the Kite got on shore at Ningpo, and of course the whole crew were captured.
>>>>>>>>>>
"The David Malcolm and the Ernaad are bringing down sheep and bullocks, which will be truly acceptable to us. The Isabella Robertson has arrived. The Kite, armed vessel, was sent, under the command of Lieut. Douglas, soon after the taking of Tinghae, to the mouth of the Yangtse-keang, for the purpose of surveying; it is supposed that she has been wrecked, as the lieutenant in charge, the captain's wife, (Mrs. Noble), and some Lascars, are in the hands of the Chinese, at Ningpo, who treat them, and Capt. Anstratheralso, with kindness; until the Chinese informed us of the circumstance, we knew nothing of the loss of the Kite. That the vessel has been wrecked, I believe, is an inference only, from the fact of the lieutenant and others being made prisoners of the Chinese."