Not the Front Stairs! 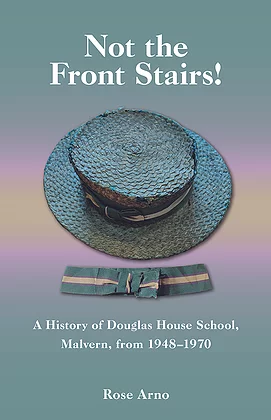 Not the Front Stairs!

Not the Front Stairs: A History of Douglas House School, Malvern, from 1948–1970

‘Sometimes in assembly (the head) would pretend that a girl had been seen eating a sweet in the street in school uniform . . . and who was it?’

‘The walk to the Priory for Foundation Day. We were arranged in height order, not age or forms and instructed to take our places and never turn around. Years later, at her memorial service and now grown women, we sat exactly like that, so indoctrinated.’
(Paula Phillips, Douglas House student, 1952–57.)

Rose Arno grew up in Welland, near Malvern and attended Douglas House, from 1955 to 1957. This book is not only her recollections of the school, but also anecdotes and comments (some good, some bad) from a whole range of students from 1948 when the school opened, until its demise in 1970. It is also the story of a remarkable woman, the school’s founder and head, Madeleine Owen-Williams (O’dub).

Madeline Clemence Ogilvie Douglas b. 21 Mar 1907, married LLewellyn Owen-Williams, a wartime padre in the Canadian airforce.  She was 'Aunty Susan' for BBC children's services in Bristol and then established Douglas House School, in Malvern.

Not the Front Stairs!  is available from the publishers, Aspect design.