Robert Burns and the Douglas Connection 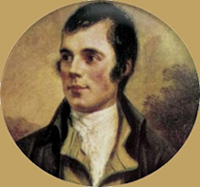 Burns Night, when Scots go daft over their national bard (no, I am not a fan!) is fast approaching, and it seemed appropriate to review the family links with Robert, or Rabbie, Burns.

Robert Burns had everything needed to become an icon in his native Scotland. He was working class and had to overcome grinding poverty before finding success. He was also, to put it mildly, a bit of a lad - part incorrigible womaniser, part dashing romantic - and to lift his spirits he liked a good drink. He then died tragically young. Scots celebrate him as their national Bard because most can, in some way, identify with him.

Yet what few people realise is that, before he found fame, Scotland very nearly lost Burns - to Jamaica.


Burns had a job to go to He had negotiated a three-year contract at a wage of £30 a year, as a bookkeeper on an estate in the town of Port Antonio, in Jamaica, owned by one of his friends, Dr Patrick Douglas. He firmly believed he would never see his native land again. In late August 1786 a melancholy Burns wrote:

"Farewell, my friends, farewell, my foes!
My peace with these, my love with those.
The bursting tears my heart declare—
Farewell the bonnie banks of Ayr!"

Some cast doubt on his understanding of what a 'bookkeeper' was on a slave estate, but given his lifestyle, I believe he probably did.

You can read more about this in the Douglas Archives.