I recollect that someone contacted me about a sail maker - but I cannot trace the message.  The following was found in the Edinburgh Gazette, 7 December 1917.

THE Business of ROBERT DOUGLAS & SON,
Sail Makers, Plantation Sail Works, Eaglesham
Street, Glasgow, was transferred by the Subscribers,
the Testamentary Trustees of the late Lieut.-Col.
Robert Jeftray Douglas, C.M.G., who was the sole
Partner thereof, to his brother, the Subscriber
William Douglas, junior, as at thirty-first October
nineteen hundred and seventeen, when the Trustees'
interest in the Business ceased.
The Subscriber William Douglas, junior, will continue the Business under the present Firm name, in
the same premises, on his own account, and will
collect the assets and discharge the liabilities of the
Business as at and from thirty-first October last.
Glasgow, 6th December 1917.
JOHN P. DOUGLAS.
MALCOLM P. DOUGLAS.
WARREN CROSBIE.
Witnesses to the Signatures of John
Park Douglas, Malcolm Panton
Douglas, and Warren Crosbie, being
a quorum of Lieut.-Col. Douglas's
Trustees—
CHAS. W. SMITH, of 30 George
Square, Glasgow, Solicitor.
F. CRITCHETT CHAPMAN, of 30
George Square, Glasgow, LawClerk.
WM. DOUGLAS, JR.
Witnesses to the Signature of William
Douglas, junior—
W. BROWN, of 30 George Square,
Glasgow, Law-Clerk.
A. CLARK, of 30 George Square,
Glasgow, Commissionaire. 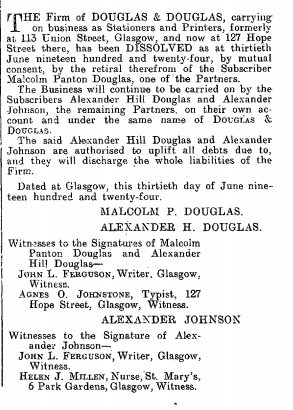