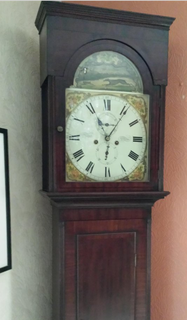 Our talk on 14 October was given by Mrs Irene Hopkins and had the intriguing title of “The Grandfather Clock Connection".   Like many of us on retirement, she became immersed in family history, particularly that of her husband, Alec, who has a long family association with Darvel where they still live.

Some years ago a request came from a gentleman living in Canada who contacted Carnegie Library wondering how to find out the provenance of a grandfather clock which "had probably been in the family for some time".  Via Tom Barclay, his request reached Irene and Alec.  At this point there occurred one of those serendipitous links that delight family historians, because the clock had been made by Alec's earliest known ancestor, a "watch and clock maker in Galston”, John Douglas who had crafted it as a wedding present for his daughter Isabella’s wedding to John Lees.  A cherished possession, the clock then travelled around Scotland with its various owners, firstly in Darvel and Galston areas, further afield to Kilmarnock and later to Glasgow.

Eventually, when the British Government offered land grants to entice British settlers to the empty country of Upper Ontario, the grandfather clock went too.  It travelled from Glasgow  to Montreal  in the mid-1930s.  But this was only its first transatlantic passage, for it has actually crossed the Pond on three occasions.

Irene was also able to solve the mystery of the “s” on her Hopkins name in Scotland, but the transatlantic name is without an “s”.  Robert Hopkin and Isabella Knox had 10 children, the ninth one, born in 1864, had an “s” added to the surname on his birth record  and that was what the rest of the Scottish clan were called whereas the family who emigrated remained as Hopkin.

In recent times, the Canadian who first enquired about its history, Ed Campbell, returned with his wife to Scotland and lived here briefly until they were persuaded by their family to go back to live in Ontario beside them.  Since then the grandfather clock has made another long journey to the home of Ed's son in Davidson, North Carolina who is now its custodian.   Ed himself, at 92, now lives in Ontario.

What a riveting story this was!  Here was a family heirloom which, so far, has made 11 momentous journeys, linking the movements of the generations of this family and bringing two branches together again after 100 years—and it is still working...

We have a section on Douglas made clocksin the Douglas Archives.

The clock illustrated here is not the one discussed (as far as i am aware) but is advertised for sale at £780.