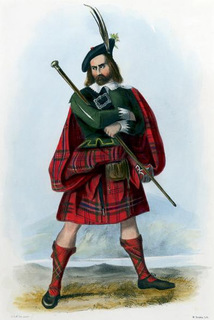 'Kirkin 0' The Tartan' is clearly Scottish, it appears that it is in fact an American concept, although probably based on folk memories. It was Reverend Peter Marshall, originally from Coatbridge, in Scotland (old Covenanter territory), pastor of the New York Avenue Presbyterian Church in Washington DC and chaplain to the US Senate who introduced the idea. Proud of his ancestral homeland and a member or the Saint Andrew's Society of Washington DC, Mr Marshall held services to raise funds for British War Relief. At one of these services in the Spring of 1941 he gave a sermon entitled 'the Kirkin 0' the Tartans' and thus a legend was born.

So while not an ancient Scottish ceremony 'the Kirkin' celebrates not" only the family heritage of the descendants of Scottish irnmigrants to the United States. Canada and other countries throughout the world, but also the friendship of these nations in peace and war.

Today Scottish, Caledonian and Saint Andrews Societies in many places around the world hold this non-denominational service. Held at any time throughout the year, Saint Andrew's Day and Tartan Day are popular dates, and many Highland Games and Clan Gatherings include this service. It is at this service that tartans representing each Scottish Clan and/or Provincial, State, Country are brought forth to be blessed. The Tartans represent the pride those present have in their heritage,

I am planning a Kirkin 0' The Tartan in Stirling for the Douglas Clan Gathering, but this may have to be at 10am. This would be preceded by a Grand march from the Castle Esplanade to the Church of the Holy Rude.

Is this too early for anyone who would be travelling through from Edinburgh?  It would mean an 8:30am start.

After the service, we would go on the the Stirling Highland Games.