Who was Sheila Douglas-Pennant?

I have been working on the Douglas-Pennant branch, filling in some of the gaps.

Along the way, I have been asked to identify where Sheila Douglas-Pennant fits into the line.  The 1937 American (Florida) press cutting below suggests that she was the BBC's first television compere (Not commerce!) and is the daughter of the Speaker of the House of Commons. 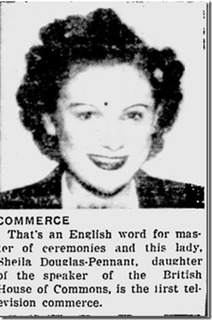 And here she is listed as the compere of Cabaret, a short BBC programme broadcast in 1938

At the time, The Right Honourable Captain Edward Algernon FitzRoy, DL (24 July 1869 – 3 March 1943) was Speaker of the House of Commons. He was married to Muriel Douglas-Pennant, elder daughter of Archibald Douglas-Pennant, second son of the 1st Baron Penrhyn who was created Viscountess Daventry, of Daventry in the County of Northampton, a viscountcy being the customary retirement honour for Speakers. To date, she was the last peeress to be granted a hereditary peerage.

They had four children, Robert, Nancy, Michael and John.  No Sheila.

Sheila Douglas-Pennant is listed in several theatre bills as an actress playing in plays and reviews. She is seen below with Arthur Askey rehearsing in her dressing room at His Majesty's Theatre. 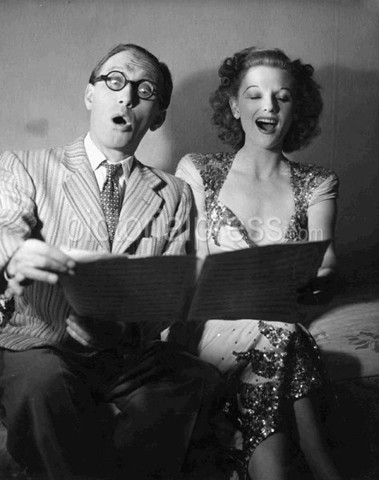 Was she the second wife of Admiral The Honourable Sir Cyril Eustace Douglas-Pennant, the son of Lt.-Col. Frank Douglas-Pennant, 5th Baron Penrhyn of Llandegai?  In 1917 he married Phyllis Constance Leigh.

Following a divorce from his first wife, Cyril next married Sheila Brotherhood in 1937. Was this our Sheila Douglas-Pennant?

Or were they both actresses and/or BBC comperes?

My friend Sally has solved the mystery - or maybe just part of it.

newspapers.nl.sg/Digitised/Article/freepress19460822.2.20.16.aspx
ADMIRAL'S DAUGHTER ACTS WITH ASKEY Sheila Douglas-Pennant is now the leading lady in "Follow the Girls," with Arthur Askey at His Majesty's Theatre, ...