We're related through Samuel Douglas (1699), although I'm a product of his son Phineas Douglass who is rarely mentioned in any documentation related to the Douglass family of the Brookline/Townsend area.

The problem you are going to have and must be prepared for is there's a ton of speculation in this family line and people putting their family trees together seem to be anxious to connect it to one of the royal lines, and this leads to poorly sourced work. The results of this work get reproduced despite the lack of evidence that supports it.

For instance, our common ancestor, Samuel Douglas, is only listed by some as being from Aberdeenshire because a Samuel Douglas born in 1699 is confirmed to have died there. However, our Samuel Douglas is buried in a cemetery in Lyman, New Hampshire, so these can't be the same person. If you go through the family trees at Ancestry.com, you'll find Samuel is listed on different trees to have been born in Collessie (Colsey), Aberdeenshire or Dreghorn, and none of these links appears to be sourced in anything substantive.

If you go one step back in the line to Samuel Douglas' father, Samuel Douglas (1652) and his wife, Hepzibah Farrar, things get even more confusing. This Samuel's birth is ascribed to two different Robert's (1593), both of whom have direct connections to a noble Douglas line (Morton and Mains), although one link is impossible because it would have required Samuel to have been sired by someone who was already long dead at the time of his conception, and the other also appears to be a straw grasp since it seems to require an undocumented extramarital affair in order to have been possible.

In any event, I hope some of this information can help you, and also that it will keep you from accepting much of what you see in some family trees at face value. :)

I've taken three DNA tests (23andme, AncestryDNA and DNA Tribes) and my Y-DNA haplogroup is R1a1a. My father and grandfather have also taken the test, and obviously this result is consistent. So, assuming a direct link from Samuel all the way down the line on both sides of the chain, your father's Y-DNA haplogroup should also be R1a1a.

On a side note, somehow they secured the Y-DNA haplogroup of the first Douglas, William de Douglas, and it happens to be R1a1a as well, so this doesn't hurt the premise that we are directly descended from the original Douglas.

I hope you find this information helpful. Let me know if I can help in any other respect. 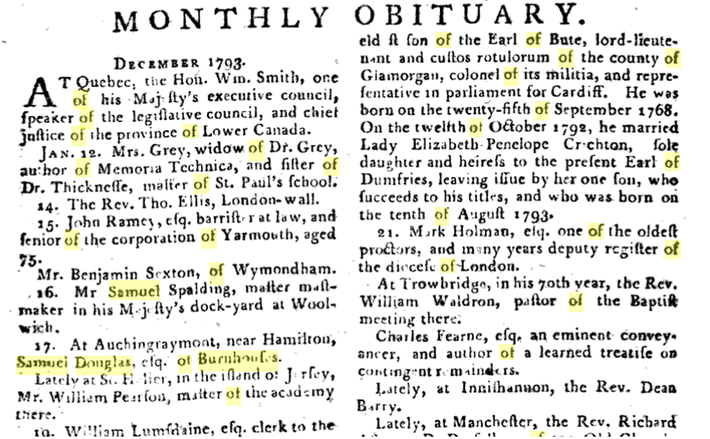