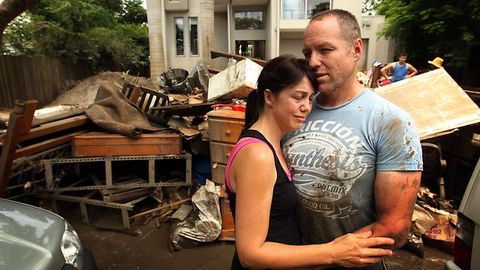 Jeff and Justine Douglas outside their flood damaged home

Regions of Queensland have begun re-emerging from the floodwaters, as Brisbane started a mass clean-up following the deluge that has swamped thousands of homes over the past few days.
As the water receded, putrid mud and debris was left covering much of the city, and many were tentatively returning to their homes to survey the damage following one of Australia's worst natural disasters.
"There is a lot of heartache and grief as people start to see for the first time what has happened to their homes and their streets," Queensland state premier, Anna Bligh, said.
"In some cases, we have street after street after street where every home has been inundated to the roof level."
The flooding across Australia's north-east has so far caused 25 deaths, and another 55 people remain missing.
In Fairfield, a leafy riverside suburb in Brisbane's inner south, the massive clean-up began in earnest yesterday. In hard-hit William Parade, wheelie bins are lodged high in trees and an armchair balances on a fence.
Down the street, Jeff and Justine Douglas had planned their dream home to the last detail -- a swimming pool for their two young children and a library to house his collection of old books.
They moved in at Christmas-time. Boxes of their precious belongings were still stacked in their low-lying garage. They are now ruined.
Thousands of Mr Douglas's books are covered with mud and are falling apart. Their home had a metre of water through the bottom level.
Mrs Douglas, who runs a wedding business, said the couple were determined to restore their dream home, but admitted it would take some time.
"We're not going to move," she said. "This is not going to make us freak out and move to the suburbs. We wanted to live near the river, and we still will."
Yesterday, they had plenty of help to get the long process started. Family and friends pitched in, as did complete strangers, wearing knee-high gumboots.
Receding floodwaters have revealed not only the massive clean-up task facing Brisbane and Ipswich, but also health risks residents will face.
Although the raging torrent in the Bremer and Brisbane rivers might be subsiding, authorities are urging residents not to rush back into properties without considering what lies beneath the sludge.
Late yesterday, 52,507 sites in Brisbane and Ipswich, including sections of the CBD, remained without power, with Energex insisting flooded homes be inspected before power can be switched back on. After the 1974 floods, at least one person died of electrocution.
Telecommunications services are being progressively restored, as are public transport links, although hundreds of kilometres of streets and roads will need repairs. As debris piles up along the banks of the Brisbane River, as well as outside homes, Brisbane City Council will need to expand its dumps; maritime authorities are considering stockpiling debris at Whyte Island near the port.