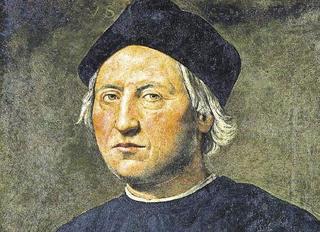 In an astonishing claim, Spanish historian Alfonso Enseñat de Villalonga has established that Christopher Columbus was a Scot - and a Douglas!

The historian spent 27 years sifting through hundreds of thousands of documents and now believes that he has proof that Christopher Columbus was descended from Scottish nobility.

In a new book, Alfonso Enseñat de Villalonga, 88, claims to have found evidence that the man who discovered America was part of the Douglas clan and was born in 1446, five years earlier than previously thought. The clan is made up of a family of nobles from Lanarkshire.

Historically there has been a biographical vacuum around the figure of the sailor who has encouraged the emergence of all kinds of beliefs about his origins. "My intention", says Villalonga,  "is not only to explain the genealogy, but also tell why there has been such a tremendous documentary vacuum."

Christopher Columbus was born and raised in a Genoese albergo. Thesis provided shelter for their own banking, own fleet and for the custom of its inhabitants to adopt the same name, which is why it has been almost impossible to know early details of Columbus.

Most of the pictures and statues of Columbus portray a sailor with bob brown hair. "Historians contemporaries of Christopher Columbus said he had blue eyes, blonde or red hair, redder than matiza-blonde, and had freckled skin. That coincides with a completely different race, curiously with Scottish race."

During a recent visit to Seville (southern Spain), I came across the tomb of Christopher Columbus in the cathedral.

On 20 May 1506, aged probably 54, Columbus died in Valladolid, Spain. His remains were first interred at Valladolid, then at the monastery of La Cartuja in Seville by the will of his son Diego Colón, who had been governor of Hispaniola. In 1542, the remains were transferred to Colonial Santo Domingo, in the present-day Dominican Republic. In 1795, when France took over the entire island of Hispaniola, Columbus's remains were moved to Havana, Cuba. After Cuba became independent following the Spanish–American War in 1898, the remains were moved back to Spain, to the Cathedral of Seville, where they were placed on an elaborate catafalque.

However, a lead box bearing an inscription identifying "Don Christopher Columbus" and containing bone fragments and a bullet was discovered at Santo Domingo in 1877. To lay to rest claims that the wrong relics had been moved to Havana and that Columbus's remains had been left buried in the cathedral at Santo Domingo, DNA samples of the corpse resting in Seville were taken in June 2003 as well as other DNA samples from the remains of his brother Diego and younger son Fernando Colón. Initial observations suggested that the bones did not appear to belong to somebody with the physique or age at death associated with Columbus. DNA extraction proved difficult; only short fragments of mitochondrial DNA could be isolated. The mitochondrial DNA fragments matched corresponding DNA from Columbus's brother, giving support that both individuals had shared the same mother.

Such evidence, together with anthropologic and historic analyses, led the researchers to conclude that the remains found in Seville belonged to Christopher Columbus. The authorities in Santo Domingo have never allowed the remains there to be exhumed, so it is unknown if any of those remains could be from Columbus's body as well. The Dominican remains are located in "The Columbus Lighthouse" (Faro a Colón), in Santo Domingo. 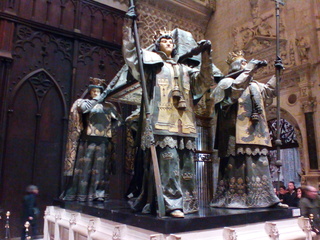 The tomb in Seville Cathedral.
Above: The remains are borne by kings of Castile, Leon, Aragon and Navarre.
Below: Christopher Columbus's coat of arms Deborah Richmond Foulkes, author of My Truth Lies in Ruins, and researcher into the Douglas Scotti family of Italy has said: " Despite the excitement generated by de Villalonga’s research and his conclusion that Christopher Columbus was a sailor from Genoa named Pedro Scotto, it would be a stretch to assume that he was a Douglas. And, I would strongly recommend that we put on hold for now any plans to rename Columbus, Ohio Douglasdale. After all, there is only one Douglasdale and that’s in Lanarkshire, Scotland".