Peggy's proposer said "Ever since my eldest brother was born with a disability 28 years ago, my mum has run a very successful and invaluable riding for the disabled group. For a long time, the charity she established has been equivalent to a full-time job, as she has over 70 riders a week and on top of that has all the horses to look after and administration to attend to. Her voluntary work extends beyond just providing rides for those with disabilities, as she also provides work placements for those with disabilities and provides both rest bite and care for them when necessary. Additionally,she has been involved in the local pony club and run's the residential camp every year. She received an MBE for all her work within the community in the NY and I feel this opportunity would be a very special moment that she thoroughly deserves, as she is also v passionate about sport!"

Thitrteen year old Toby Douglas, from Berwick Upon Tweed, carryied the Flame through Workington on 21 June 2012.

Toby has become a top competitor only two years after starting to swim competitively. He joined Eyemouth swimming club in September 2009 where he began to swim in club and local competitions. Toby has committed a huge amount of time to his swimming, swimming over 20,000 meters per week during 7 training sessions.

At the 2011 Scottish schools championship in Glasgow Toby became the under 12 champion for the 50 meter freestyle and was overall under 12 champion. At Dunn's 500 (Regional completion) Toby broke Euan Dales record which had stood for 11 years, in the 100 meter individual medley, Euan Dale was believed to be one of the best ever at this discipline, he was a common wealth champion and Olympian. Currently Toby is taking part in the national squad training programme. The growth within the Eyemouth swim team has been incredible over the past few years with swimmers developing at an astounding rate, gaining confidence and experience. It is clear that Toby's success is not solely down to himself but of which he will freely admit is influenced strongly by his coach and team mates. This month Toby has been awarded a Berwickshire sports award 2011 for achievement. His dream is to represent GB in the 2016 Olympics in Brazil.

Carrying the Flame through West Bromwich 30 June 2012 was Carl Douglas, of Felixstowe, who is aged 48.

Carl is an exceptional person in many ways. He has an incredible depth of knowledge in his subject area of learning & development and has been at the vanguard of shaping novel ways of structuring and delivering learning. He was instrumental in developing the used of new social media as a way of sharing knowledge across the organisation. Carl is always open to sharing his knowledge & experience, helping colleagues in different parts of the business. He takes this open approach to helping and supporting others outside of work - being an active tennis coach, supporting young & old alike, to develop and achieve their best. I've nominated him as I believe him to be a role model in supporting, helping & coaching others.

Adam Douglas, 49, of Chippenham carried the Flame through Poole on 13 July 2012

Adam's entire working life and been for the benefit of others, whether that be the students he leads as Head of a large PE department in Wiltshire or his own community where he has given endless hours voluntarily to both coaching and participating in a number of different sport for various age groups. An advocate of the Olympic Values Adam has used these within the school to develop the holistic approach to education that he believes positively develops young people and encourages them to make balanced, healthy, active lifestyle choices. His students admiration of him as both a teacher and a man is evident as soon as you see him in school. His colleagues' respect is something which he easily earns through his nurturing approach to all he does and his steadfastness in delivering on every commitment and promise. Adam's integrity is renown and his selflessness a way of life.

Londoner Janine Douglas-Hall, 40, carryiied the Flame through The London Borough of Barnet on 25 July 2012 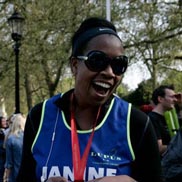 Janine's said: "Throughout my life I have always tried to find time to help others. I have volunteered on a number of schemes for young people, and have worked on a number of projects within the boroughs Southwark and Lambeth, through CSV. I worked at schemes during school holidays, driving a mini bus to various activities, and supervising workshops. I am also a keen believer in volunteering, and have partook in radio and tv interviews advocating the benefits of volunteer work. I was even asked to speak during one of the sessions at the Labour Party Conference in 1997/98. I have previously volunteered in primary schools assisting children with reading difficulties and helping refugee children with their English and settling into their new environment.

This year I ran the London Marathon, raising over £3500 for Lupus UK, a condition I was recently diagnosed with. Raising awareness for this charity has rekindled / reminded me how important it is to support one another."