Letters My Grandfather Wrote Me, By Bryan Crawford 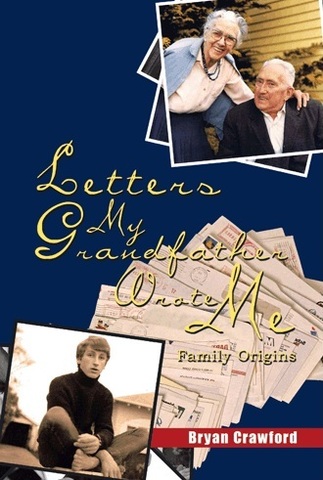 Remarkable research endeavour enables author to trace the roots of his family back to 300 B. C. revealing a rich history and an unexpected celebrity.

When Bryan Crawford started to investigate his family tree he could never have imagined the incredible stories he would uncover. Genealogy has long been a true passion for Bryan, ever since his grandfather gave him two Victorian photographic portraits of his ancestors, who hailed from Dorset, England. These beautiful images inspired the author to start digging; the results of his dedicated and lengthy inquiry have been astonishing, compiling arguably one of the most significantly detailed and informative family trees ever researched. Over the years, Crawford has uncovered a staggering 150 family portraits, tracing his ancestral line back through 2,000 years of history, in which the family has often played a significant role.

This book is the illuminating record of Bryan Crawford’s family investigation, revealing prominent ancestral lines in the military, the church, the medical profession and also the aristocracy. After meeting two world leaders in the 1970s and 80s, Bryan moved to London in 1990, where he was surprised to discover Lloyd's Bank issuing posters of him all over the city! Returning home after three years, he discovered that the story of his family had in fact also been featured in Hollywood films for decades. According to Bryan, "During my research I discovered startling evidence that not only showed my family being featured in well-known films, but these films had common sub-themes in the use of subliminal sound and social control."  Letters from my Grandfather: Family Origins puts the lives of one family and the social history of all of us into context. Thought-provoking and engaging throughout, brought to life by vibrant family photographs from across the generations; it’s also a timely publication certain to spark debate on the social ethics of modern life.

About the Author: Bryan Crawford is fifty-eight years old.  Shortly after he turned twenty he married a Maori girl and within weeks took into care her three nieces, and nephew, followed by the arrival of their own children, a son and a daughter. He qualified as a Clinical Psychologist in the 1980s and continues to work in healthcare. Bryan Crawford lives in Wellington, New Zealand.

Have I ever posted this ? cousin Bryan Crawford and Brother Lew visited and we got invited to the Archives at Whangarei Musemn to see Lady Drake and Sir Robert Douglas 3rd Barton personal items , clothing , amazing jewellery and dresses of reed velvet of Lady Drakes
now there is a lockett of hair in the back of one of the items of Jewellery , that might be of interest to the Strathclyde University , for maybe a DNA sample for Drakes