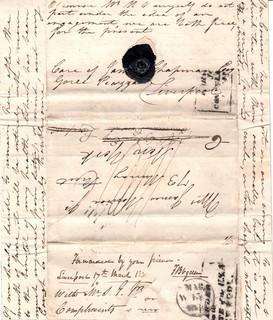 I have just received copies of letters written to Betsy Mary Monroe, nee Douglas, and others, in 1830.  This image is the 'envelope' for three of them.

Betsy is the daughter of George Douglas and Margaret McCrone, George being the brother of Sir William Douglas of Castle Douglas.

Betsy Mary Douglas, was married to Col James Monroe, nephew of US President James Monroe (and possible an adopted son?).

I am looking for help identifying others mentioned in the letters:

George is also referred to as 'Geo Douglas';

'Your brother Wiliam' is presumably the William mentioned above;

But who are these?

William Betts...After studying law with David B. Ogden.... joined the firm of his father-in-law, Beverly Robinson, as Betts, Emmet & Robinson at No. 52 Wall-street.... he was counsel for the plaintiff in the case of Monroe against Douglas, in which James Monroe, son of President Monroe, sought to secure from Mr. Douglas, his brother-in-law, a redistribution of property left to the family by Sir William Douglas, of Scotland."

Looking up the case of Monroe v Douglas

Reports of Cases Adjudged in the Court of Chancery of New York, Volume 16

Aswell there seems to be a connection to Mr Halliday and Monroe's daughter , described from the pdf link below .

1 Nov. ,1837 , James Monroe to Mr Halliday ,''Forbids him to use the Monroe name in any connection with the previous incident [?] concerning his daughter ; warns him to be careful of his judgements because his past misunderstandings have lead him into error before

Margaret Douglas, who was visiting friends in Liverpool when she died on 9 Jan 1830, aged 63 and described as 'Of New York', wife of George the brother of Sir William Douglas of Castle Douglas, is interred in themausoleum in Castle Douglas

the letter you have  may go with some extracts in this pdf , or give further assistance http://scdb.swem.wm.edu/findingaids/83_M75_Monroe__James.pdf

James Monroe , New York  politician [i think he was the president Monroe's nephew ]

His family consisted of his wife, Eliza Douglas Monroe (1799–1852), son William D. Monroe, and daughter Fanny (1826–1906). Following his wife's death he retired from public life to Orange, New Jersey, where he died on September 7, 1870 at age of 70, days before his 71st birthday. He is interred at Trinity Church Cemetery in Manhattan. [ Source , Wikipedia ]

The following interesting letter relating to this subject is published in Mr. J. M. Swank's census report of 1880, on iron and steel manufactures, the writer of the letter being a nephew of Mr. Robert L. Stevens:—

DEAR SIR: In answer to your letter of the 27th instant 1 will say that I have always believed that Robert L. Stevens was the inventor of what is called the T-rail, and also of the method of fastening it by spikes, and I have never known his right to the invention questioned.

The rail of the Liverpool and Manchester Railroad, on its opening, in September, 1830, was of wrought iron, divided into fish-bellied sections, each section being supported by a cast-iron chair, to which it was secured by a wooden wedge. The form was derived from the old cast-iron fish-bellied train rail, cast in single sections, each about 36 inches long. This wrought-iron rail was afterwards improved by making its bottom straight uniformly throughout its length.

Mr. Stevens' invention consisted in adding the broad flange on the bottom, with a base sufficient to carry the load, and shaped so that it could be secured to the wood below it by spikes with hooked heads; thus dispensing with the cast-iron chair, and making the rail and its fastenings such as it now is in common use. In the year 1836 and frequently afterwards he spoke to me about his invention of this rail, and told me that in London, after unsuccessful applications elsewhere in England, shortly after the opening of the Liverpool and Manchester Railroad, he had applied to Mr. Guest, a member of Parliament, who had large rolling mills in Wales, to take a contract to make his rail for the Camden and Amboy Railroad, of which he was the chief engineer; that Mr. Guest wished to take the contract, but considered that it would be impracticable to roll the rail straight; that, finally, Mr. Guest agreed to go to Wales with him and make a trial; that great difficulty was at first experienced, as the rails coming from the rolls curled like snakes, and distorted in every imaginable way; that, by perseverance, the rail was finally successfully rolled; and that Mr. Guest took the contract. The Camden and Amboy Railroad, laid with this rail, was opened October 9th, 1832, two years after the opening of the Liverpool and Manchester Railroad. Of this I was a witness.

This rail, long known as the old Camden and Amboy rail, differed but little, either in shape or proportions, from the T-rail now in common use, but weighed only 36 pounds to the yard. For the next six or eight years after the opening of the Camden and Amboy Railroad this rail was but little used here or abroad, nearly all the roads built in the United States using the flat iron bar, about 2½ inches by ¾ inch, nailed to wooden rails, and the English continuing to use the chair and wedge.

My uncle always regretted that he had not patented his invention. He mentioned to me, upwards of forty years ago, that when advised by his friend, Mr. F. B. Ogden, the American consul at Liverpool, who was familiar with the circumstances of his invention, to patent it, he found that it was too late, and that his invention had become public property.