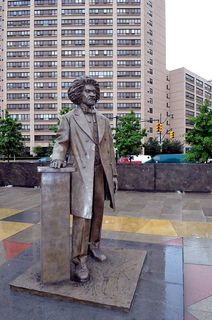 A statue has been erected in Central Park, New York, to commemorate the life of  Frederick Douglass,  the famous African-American abolitionist, orator, writer, and statesman.

Frederick Douglass (1818–1895) escaped to New York as a young man from a slave owner and dedicated his whole life to the struggle against slavery. Though born a slave, Douglass learned to read and write in secrecy. He published his famous autobiography depicting his life as a slave and later traveled around America and Europe making speeches on abolition. Douglass served as a consultant to President Lincoln during the Civil War.

“Frederick Douglass famously said ‘If there is no struggle, there is no progress,’ and today’s dedication of the Frederick Douglass Memorial reflects the monumental effort undertaken to build a lasting legacy to a great American hero in the middle of a bustling intersection,” said Parks & Recreation Commissioner Adrian Benepe. “We hope that New Yorkers will gaze upon this stunning memorial ... and be inspired by the great civil rights leader.”

“One of my favorite quotes from Frederick Douglass is, 'It is easier to build strong children than to repair broken men,'” said Morris. “This statue allows young kids who might not know who he is to ask 'who is this man?' and an adult can tell them this is one of America's greatest heroes, and his experience will be a source of inspiration for our children.”

The intersection of West 110th Street and Eighth Avenue, also Frederick Douglass Boulevard, was named after Douglass in 1950.
Read more>>>