Tommy is second Douglas to gain statue status this month 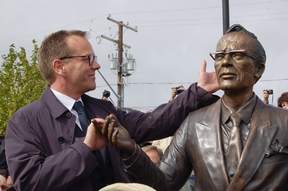 The clouds parted briefly to shine light on the newly unveiled statue of former Premier and 'father of Medicare', T.C. Douglas in Weyburn, Saskatchewan, Canada, thanks to the generosity of an internationally renowned artist and the town that supported 'the Greatest Canadian' at the beginning of his political career.

Many dignitaries were in Weyburn on September 10 to view the unveiling of the life-size statue including Douglas' grandson and famous Hollywood actor Kiefer Sutherland, and the artist that made it all possible, Lea Vivot.

The large crowd gathered at the Riverfront Boardwalk to witness the historic moment broke into applause after Sutherland and Vivot removed the tarp that was covering the statue.

"I've waited a long time to hold my grandpa's hand again," remarked Sutherland after stepping onto the statue's base and grabbing its outstretched hand.

Sutherland regaled the audience with stories about his grandfather Tommy and his mother Shirley Douglas, Tommy's daughter.

"All the time I spent with my grandfather, whether he was in Ottawa, Wakefield, Toronto – all the stories were about Weyburn," Sutherland told the large crowd. "I always wanted to come to this place because everything I identify with my family came from this place."

He admitted to being jealous of his twin sister Rachel when she accompanied their grandmother Irma to Weyburn in 1985 to donate a grand piano to Tommy's old ministry, the Calvary Baptist Church, which later became the Tommy Douglas Centre.

Sutherland said he was grateful to finally see the town from his grandfather's stories, including Tommy?s former house on Coteau Avenue and his former church and its memorabilia at the Tommy Douglas Centre. He said that he hoped to bring his two daughters and grandson to see all the sites, some day.
In 1934, Douglas ran unsuccessfully in the provincial election. He ran in the federal riding of Weyburn the next year and was narrowly elected. Douglas became Premier of Saskatchewan in 1944 and held the position until 1961.

Sutherland explained that the struggle of Medicare, creating infrastructure, schools and balancing the budget and everything that was occurring at the time was no light task and it took a community like Weyburn that he could come home to that supported him.

This memorable day in Weyburn began five years ago when Vivot decided she must commemorate Canada's 'Father of Medicare' and contacted the city of Weyburn where Douglas began his political career and ministered at the Calvary Baptist Church for several years. After Ross McMurtry and Isabelle Butters spear-headed a campaign to raise $30,000 to cover the cost of materials, Vivot waived her professional fee and got to work. The bronze statue was in the works for over two years by Czech-born artist Vivot, who said her work was 'a labour of love'.

Earlier this month, a statue has been erected in Central Park, New York, to commemorate the life of  Frederick Douglass. Read more>>>