Protesters being removed from Douglas estate

Tree-houses have been built, the tunnels dug, the barricades erected and the arm-locks secured to branches.

Mainshill Wood, in the Lanarkshire countryside, has become Scotland's new environmental battleground this morning as an army of bailiffs moved in to evict protesters against a huge opencast mine. Scottish Coal was last year given permission to extract 1.7 million tonnes of coal from the site located on Lord Home's Douglas estate. If it goes ahead, South Lanarkshire will become one of the most intensively mined areas in Europe.

But first the company will have to remove around 60 protesters who made their home in the centre of the wood six months ago. Ten protestors have already been arrested after being evicted from the site.

They have spent the time industriously, constructing a complex of tree-houses and interconnecting underground tunnels. Arm-lock devices – in which arms are threaded through a pipe and chained to a tree – have been installed at heights of 50 ft above the ground.

The main camp itself has been fortified and the access roads blocked with heavy metal scaffold pyramids.

The protestors' website said that they were: "Preparing to resist any attempts to remove us from the area. Mainshill has stood in solidarity with the local community of Douglas for seven months and we’re not about to surrender to the wishes of fat cat landlords, Scottish Coal, or corrupt councillors any time soon!"

Strathclyde Police said that the eviction got under way at around 9am on Monday morning. They estimate that there are around 15 protesters involved in the occupation, with about another 15 supporters outside the camp.

Police are supporting Sheriff's Officers, including members of the National Eviction Team who have special expertise and equipment for removing people from heights and from underground and for removing people who are using locks to attach themselves to objects to make their removal more difficult.

Lindsay Addison, who chairs Douglas Community Council, said the protesters had the backing of local people and he claimed the community had been betrayed over their opposition to the mine."Sadly there will be people rubbing their hand with glee about this," he said. "Senior representatives of the local community have stabbed us in the back. Money has bent people in the wrong direction. It is only a matter of time before people realise the mistakes they have made and consider the disastrous effects an open cast mine will have on the wider community both locally and globally." 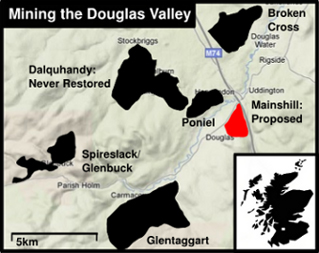