Extract from Chambers' 1869 The Book of Days.

It will be learned, not without interest, that certain relics or memorials of the fight of Otterbourne are still preserved in Scotland. The story of the battle represents Douglas as having, in a personal encounter with Percy in front of Newcastle, taken from him his spear and its pennon or hanging flag, saying he would carry it home with him, and plant it on his castle of Dalkeith. The battle itself was an effort of Percy to recover this valued piece of spoil, which, however, found its way to Scotland, notwithstanding the death of its captor. One of the two natural sons of Douglas founded the family of Douglas of Cavers, in Roxburghshire, which still exists in credit and renown; and in their hands are the relics of Otterbourne, now nearly five hundred years old. It is found, however, that history has somewhat misrepresented the matter.

The Otterbourne flag proves to be, not a spear-pennon, but a standard thirteen feet long, bearing the Douglas arms: it evidently has been Douglas's own banner, which of course his son would be most anxious to preserve and carry home. The other relic consists of a pair of, apparently, lady's gauntlets, bearing the white lion of the Percies in pearls, and fringed with filigree-work in silver. It now seems most probable that this had been a love-pledge carried by Percy, hanging from his helmet or his spear, as was the fashion of those chivalrous times, and that it was the loss of this cherished memorial which caused the Northumbrian knight to pursue and fight the Earl of Douglas. We owe the clearing up of this matter to a paper lately read by Mr. J. A. H. Murray, of Hawick, to the Hawick Archaeological Society, when the Douglas banner and the Percy gauntlets were exhibited.

It may be said to indicate a peculiar and surely very interesting element in British society, that a family should exist which has preserved such relics as these for half a thousand years. Let American readers remark, in particular, the banner was laid up in store at Cavers more than a hundred years before America was discovered. The writer recalls with curious feelings having been, a few years ago, at a party in Edinburgh where were present the Duke of Northumberland, representative of the Percy of Otterbourne celebrity, and the younger Laird of Cavers, representative of the Douglas whose name, even when dead, won that hard-fought field. 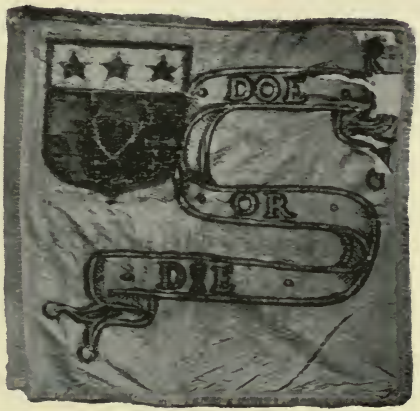 I have today identified another Cavers banner - details here: http://www.douglashistory.co.uk/history/heraldry/cavers_banners.htm

I wonder where it is?

In recent correspondence with Andrew Spratt, he asserts that the continuing existence of the Percy banner is a myth.

The following extract is taken from the article of the Douglases of Cavers.

Archibald Douglas carried his father's standard at the battle of Otterburn, and defended it with success against the repeated attacks of the English; it is still preserved at Cavers. (This circumstance has probably misled those historians who have stated that it was the flag of Percy which Douglas captured before Newcastle. The trophy which Earl Douglas won in that encounter, and which has been always preserved along with the foregoing, was a small ornament of silk, with the cognisance of the Percies embroidered in small pearls, which was attached to the end of Percy's lance when it was captured by Douglas.)


And this from Clan douglas Association of Australia newsletter.
Sir Archibald Douglas, 1st Laird of Cavers was the 2nd illegitimate son of James, 2nd Earl of Douglas and Mar. In 1388, he was present at the battle of Otterburn where he carried the Douglas Standard. This Standard was first in Cavers House, Roxburghshire, but is now to be seen in the Museum of Antiquities in Edinburgh.