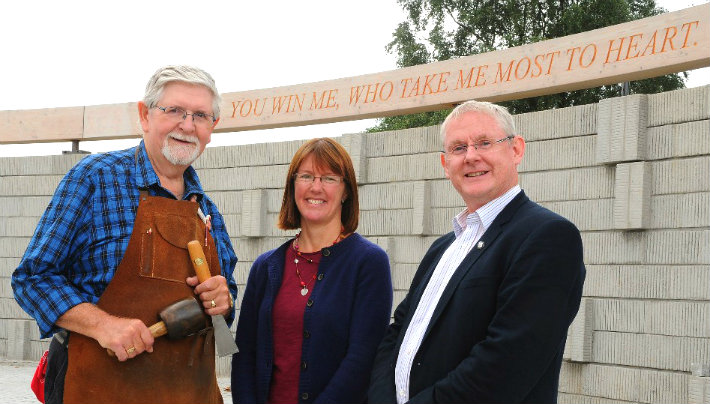 The last word of new, commemorative poem has been inscribed into the round beam crowning the 1960s monument at the Bannockburn heritage site near Stirling.

The poem was written by the University of Stirling's Chair in Creative Writing, Professor Kathleen Jamie.

The carving completes the designer’s original idea for the monument which was intended to include an inscription when it was installed in time for the 650th anniversary of the Battle of Bannockburn.

Professor Jamie's poem was selected through the combination of a public vote and deliberations of a judging panel to become a permanent feature of the iconic Rotunda monument which marks the spot where Robert Bruce is said to have planted his standard.

An overwhelming majority of almost 1000 members of the public voted for her poem. An expert panel, including Scots Makar Liz Lochhead and specialists on Bannockburn and the Rotunda monument, made the final decision in December 2012.

Inscription works by expert carver Richard Douglas from Andrew Miller Architectural Joinery based in Stirling commenced in June 2013 when a new timber ringbeam was installed at the monument. The works to the monuments are nearing completion and the Rotunda has been conserved for future generations to enjoy.

The new poetry was commissioned by the National Trust for Scotland and Historic Scotland, in partnership with Creative Scotland and the Scottish Poetry Library. Ten acclaimed Scottish poets were set the challenge to write new works inspired by the site and its surrounding landscape, exploring the significance of the Bannockburn battlefield to people today.

The commission is part of the Battle of Bannockburn project to transform the site, which has long been a place of commemoration, in time for the 700th anniversary of the battle in 2014.

A programme of conservation, restoration and enhancement works to the commemorative park and the Bruce statue, Rotunda monument and flagpole, which had suffered from the treatment of the rough Scottish weather over the years, is almost complete. The exciting new Bannockburn facilities will also include a visitor centre with state-of-the-art interpretation of the battle set to open in March 2014.

The Bannockburn project team was so impressed by the high quality and diversity of poems commissioned that they will be published together for the first time in 2014. The other poets were: John Burnside, Robert Crawford, Douglas Dunn, Alec Finlay, Valerie Gillies, William Letford, Aonghas MacNeacail, Tom Pow and Robin Robertson.

Kathleen Jamie is one of a remarkable clutch of Scottish writers picked out in 1994 as the ‘new generation poets’. Also an essayist and travel writer, Jamie is well known for her ability to evoke a landscape in prose. She became Professor of Creative Writing at the University of Stirling in 2011 and recently won the 2012 Costa Poetry Award.

Professor Jamie said: "From the start I wanted this piece of work to make a nod to the Scottish literary tradition and the Scottish landscape, to evoke the deep love of a country that makes one community out of many people. As Bannockburn is so important in Scottish history, it seemed proper to acknowledge our cultural traditions, especially poetry and song about landscape. Of course I'm pleased 'my' poem was chosen, but I don't think of this work as 'mine' any longer. It’s built from traditional materials, so to speak, and it’s spun into the future, and like the land it describes, it belongs to everyone that appreciates it."

David McAllister, Director of the Battle of Bannockburn Project said: "The designer behind the original Rotunda monument, architect Sir Robert Matthew, planned for it to bear an inscription, and half a century later we have fulfilled this intention. The Rotunda is the central place for commemoration of the battle of Bannockburn and our intent is to continue that tradition of memorial and contemplation. Kathleen’s poem encapsulates the essence of the Battle of Bannockburn project – introducing a contemporary take on the battle and the landscape, while paying respect to the memory of this important moment in Scottish history."

Liz Lochhead, the Scots Makar said: "The poets who tackled the subject of the Bannockburn site used an impressive variety of strategies to make real poems, and do justice to the subject. Kathleen Jamie’s poem impressed me with its clarity and condensed language – the right language for an inscription and for reflection.”

Robyn Marsack, Director of the Scottish Poetry Library and chair of the judging panel, said: "Poetry is the art in which Scotland has excelled for centuries, and it is very fitting that this ancient site should be celebrated by a contemporary poet. Kathleen Jamie’s poem is a moving meditation on the relationship between people and their land, taking it beyond nationalism to what is enduring.”

The Battle of Bannockburn project is funded by generous support from the Scottish Government and a £4.1 million grant from the Heritage Lottery Fund. A feature on the University's links with Bannockburn features in the current edition of Stirling Minds.

Footnote:
1.  Richard sent me some photographs some time ago, but I have regrettably mislaid them.