The Douglas of Douglas Fir 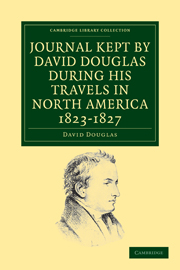 New book published this month; click the image to order.

David Douglas is another of those unfortunate people who are remembered for a Bizarre Death as much as for their achievements in life. The botanist and plant hunter fell into a pit dug by the natives in Hawai’i to trap wild cattle, and this one unfortunately already contained an uninjured wild bull. The death of an energetic and intrepid scientist at the age of only 35 was widely mourned, and he is commemorated by many species names: the blue oak (Quercus douglasii), the poached egg plant (Limnanthes douglasii) and the black hawthorn (Crataegus douglasii) – all plants from northern California and Oregon first described by him – and of course by the Douglas fir (Pseudotsuga menziesii – the genus name has at various times been Pinus, Picea and Abies), which he introduced to Scone Palace in 1827.
Douglas was born in 1799: his education is alleged to have been patchy because he was always truanting to pursue his interests in natural history. At the age of 10 he began work in the gardens of Scone Palace, and in 1820 he moved to the botanic garden at Glasgow, where he came to the attention of the great Sir William Jackson Hooker, who recommended him to the Royal Horticultural Society as a potential plant collector.

He was sent by the Society to the eastern United States in 1823, and to the north-western seaboard two years later. On his return in England in 1827, his collection of live and dried plants and seeds caused massive excitement in botanical circles, and the young, good-looking and modest explorer was lionised by society to an extent which he found oppressive. He set our for the Pacific north-west again in 1829, this time visiting the Sandwich Islands en route. He spent the next four years on the Pacific coast of American, regularly sending plant material back to the RHS, and recording his findings in journal notes, more formal reports to the Society, and detailed plant lists.

In 1833 he planned a further trip to the Sandwich Islands, arriving in January 1834. The last journal entry published (from that month) describes a dangerous ascent of the volcano Mount Kuah (Mt Kilauea); having spent some time on the island of Oahu, he set off again on 3 July for Hawai’i, and he appears to have met his death on 12 July, after dismissing his guide, who had warned him of the danger of the cattle traps. His travelling bag was found a short distance away, guarded by his little dog, and it was surmised that he had gone past the pits, then walked back, perhaps to look at the animal, and had fallen in. The guide in question was an ex-convict from Botany Bay, and there was later speculation that Douglas might have been murdered, but there seems to have been no motive, and the doctor who examined the body believed that the wounds were consisted with goring and trampling. Douglas was buried in the cemetery of Honolulu, and a white marble monument, describing him as ‘indefessus viator’ and ‘victima scientiae’, was later placed over his grave.

Douglas’ published writings were limited to papers written for the RHS and other learned societies, but in 1914 William Wilks (clergyman, breeder of the Shirley poppy, and secretary of the Society) published this edition of his journals and other papers. In the preface he states that ‘Many causes have contributed to the delay’ in publishing the material: the prosaic reasons are that the handwriting is difficult to read, and the ink is very faded; furthermore, a great deal of time has been spent in annotating the mentions of plant species with the correct current nomenclature; furthermore, both Wilks and Mr Hutchinson (the Society’s librarian) are very busy men. Most intriguingly, while the account of the travels in north-west America was already typeset, a second manuscript was discovered which contained a great deal of additional information which had to be spliced in. (Unfortunately there is no explanation of the existence and sudden appearance of this second account, though at one point Douglas does refer to making a copy of his notes.)

The book contains, in addition to Douglas’ own writings, a short memoir of him by Wilks and an account of his death and burial sent by missionary friends to the British Consul of the Sandwich Islands (a Mr Martin was going to take care of the little dog). The journals range from daily jottings of people met and plants collected to longer passages of description, written with fluency and engaging enthusiasm.
Douglas was clearly a stoical traveller. There are several occasions when food and water are in extremely short supply; he suffers frequently from rheumatism in the legs, and at one point is incapacitated through kneeling on a rusty nail while packing up his specimens. An abscess forms on his knee which does not ‘suppurate’ until nine days later, but his main concerns are that he cannot personally supervise the loading of his material on board ship and that he is losing days which should have been spent in seed collecting.

Another hazard of travel is the tendency of the Indian tribes among whom he is travelling to declare war on each other or on the European settlers at the slightest perceived provocation: thankfully most of these hostilities are ended by big feasts and without too many casualties, but they do prove disruptive and alarming. And then there are the canoes that overturn, causing the loss or ruin of both specimens and food supplies (the loss of tea is a major disappointment – he seems to have lived on tea and either dried salmon or barbecued horseflesh for weeks at a time). There is continual anxiety about keeping the reams of paper used to press specimens dry in the almost permanent rainfall, and similar problems with collected seed, which has to be taken out and aired whenever possible. And of course there are the bears – one friend of Douglas was saved by the poor quality of his clothes, which tore as the bear clawed them while the man leapt up into a tree. The clothes were shredded but the man survived until he was rescued.

The yearly plant lists, interspersed in the journal and numbered consecutively, total 499 species in 1825, 227 in 1826 and 291 in 1827. Many were then unknown in Europe, though they are now familiar garden plants, such as sunflowers, ‘pentstemons’, heuchera and evening primrose. He also noted birds and fish, soils and minerals, weather conditions and temperatures, the character and way of life of the Native Americans, and the occasional encounter with a fellow explorer or scientist (he met Sir John Franklin at Norway House (now in Manitoba) in 1827).

A touching extract from 1 January 1826 gives a sense of the man:
‘Commencing a year in such a far removed corner of the earth, where I am nearly destitute of civilised society, there is some scope for reflection. In 1824, I was on the Atlantic on my way to England; 1825, between the island of Juan Fernandez and the Galapagos in the Pacific; I am now here, and God only knows where I may be the next. In all probability, if a change does not take place, I will shortly be consigned to the tomb. I can die satisfied with myself. I never have given cause for remonstrance or pain to an individual on earth. I am in my twenty-seventh year.’