Witches in your dungeon?

Can you tell me if you kept witches in your dungeon as I have a sister who believes she was a witch in a past life..?

I was asked this a couple of years ago, and it came to mind again as I considered the fact that Hallowe'en is upon us again.

Do we have witches in the Douglas family, I wondered?

Archibald, 6th Earl of Angus's sister, Lady Janet Douglas of Glamis, was accused of witchcraft and treason and was burned at the stake in 1537.

Lady Janet was a beautiful young woman. An eyewitness of the execution described her suffering with great commiseration. Being in the prime of her years, of singular beauty, she endured her suffering, and although being a woman, with a man like courage. Her innocence was never doubted. It is believed that she was not executed for witchcraft, but for the hatred James V had for her brother.

Two sons of Douglas of Barloch having been drowned, crossing a river at one time, the father was induced by Janet Douglas (reknowned for identifying witches) to believe that the calamity was the effect of witchcraft. Barloch consequently caused John Gray, Janet McNair, Thomas and Mary Mitchell to be apprehended and carried to Stirling Tolbooth. Barloch, being 'a gentleman of mean fortune' could not afford the cost of their detention, and on 5 July 1677 an investigation was ordered into their alleged crimes. The outcome is not known, but Janet Douglas was 'banish(ed) beyond the seas'.

Archibald, 8th Earl of Angus was a powerful political figure. However, he died in August 1588 aged only 33. Witchcraft was reported as the cause.

Family members were involved in the subsequent 'North Berwick Hunt'.

From June through September of 1692, nineteen men and women, all having been convicted of witchcraft, were carted to Gallows Hill, a barren slope near Salem Village, for hanging. Another man of over eighty years was pressed to death under heavy stones for refusing to submit to a trial on witchcraft charges. Hundreds of others faced accusations of witchcraft. Dozens languished in jail for months without trials. Then, almost as soon as it had begun, the hysteria that swept through Puritan Massachusetts ended.

Persons who scoffed at accusations of witchcraft risked becoming targets of accusations themselves. One man who was openly critical of the trials paid for his skepticism with his life. John Proctor, a central figure in Arthur Miller's fictionalized account of the Salem witchhunt, The Crucible, was an opinionated tavern owner who openly denounced the witchhunt. Testifying against Proctor were Ann Putnam, Abagail Williams, Indian John (a slave of Samuel Parris who worked in a competing tavern), and eighteen-year-old Elizabeth Booth, who testified that ghosts had come to her and accused Proctor of serial murder. Proctor fought back, accusing confessed witches of lying, complaining of torture, and demanding that his trial be moved to Boston. The efforts proved futile. Proctor was hanged. His wife Elizabeth, who was also convicted of witchcraft, was spared execution because of her pregnancy (reprieved "for the belly"). The Proctors were the parents of sarah, who married William Douglas, III, son of Deacon William Douglass, Jr. (1645-1724).

The Paterson's are Douglas vassals, and the story is told of one Mr Paterson, who had run over the kingdom for trial of witches, and was ordinarily called the Pricker, because his way of trial was with a long brass pin. Stripping them naked, he alleged that the spell-spot was seen and discovered.

After rubbing over the whole body with his palms, he slipt in the pin ; and it seems, with shame and sorrow being dashed, they felt it not, but he left it in the flesh, deep to the head, and desired them to find it and take it out. It is said some witches were discovered ; but many honest men and women were blotted and broke by this trick. In Elgin there were two killed ; in Forres two ; and one Isabel Duff, a rank witch, burned in Inverness. This Paterson came up to the church at Wardlaw ; and within the church pricked fourteen women and one man brought thither by Chisolm of Comar, and four brought by Andrew Fraser, chamberlain of Ferrintosh. He first polled all their heads, and amassed the heap of hair together, hid it in the stone dyke, and so proceeded to pricking. Several of those died in prison, being never brought to confession. This villain gained a great deal of money, having two servants. At last he was discovered to be a woman disguised in men's clothes. Such cruelty and rigour was sustained by a vile varlet impostor!

Oh! No, I don't have any witches in my dungeon! Are there any in your family? 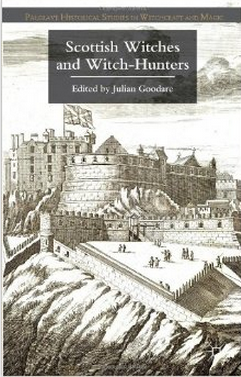 .
venged of her brother who had wronged her [her being Catherine Sands]

in parting of her father' goods, and gear ; she was brought under the Devil's

service ,  who appeared to her in the likeness of a Gentleman.

And in the first place caused her renounce Christ and her

Baptism, and give her self over both soul and body to his

and the other to the sole of her foot & Isabel Inglis

the Devil . . . caused her resign her self to him ... in the way and manner confessed by Catherine Sands

And further confessed that her spirits name was

and her name which he gave her

There is a  show sometimes on here called Haunted Castles of Scotland , and they tell the tale that Lady Janet Douglas of Glamis was burned at the stake