Edward J. Douglas, (Dlugosz) 85, passed away after a long illness at Newark Beth Israel Medical Center on his birthday, July 20, 2012.

There is a wonderful photograph album, of which this photo is just one, attached to his obituary. It would be nice to know who all the family members are, but sadly they are not captioned. But worth …

Peggy's proposer said "Ever since my eldest brother was born with a disability 28 years ago, my mum has run a very successful and…

When London last hosted the Olympic games, in the summer of 1948, the Cold War had begun, President Harry S. Truman had just put an end to racial segregation in the United States Armed Forces, and 26-year-old track star Herb Douglas was a long jump away from bringing home bronze.

On the eve of this year's London Olympic games, Douglas, who is now the oldest living African-American Olympic medalist at age 90,…

Footballer Douglas is no Douglas!

Newcastle Football Club is awaiting a response from FC Twente after tabling a bid for Brazil-born defender Douglas.

So - not a member of the clan!

There are at least four volumes of the Drumlanrig Manuscripts available to download.

I have only just stumbled across these, so have yet to study them, but they appear to include valuable charters covering the Douglases rights to lands and titles, so this looks like work for the longer term.

Here are two of them: 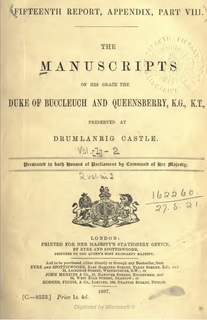 Stephen Van Rensselaer III (November 1, 1764 – January 26, 1839) was the 10th richest American of all time. If I have the right generation, he was the "Good Patroon" and one of the founders of Stephentown, which was named after himself.

It is of interest, therefore, that two Douglas children were given the name Stephen Van Rensselaer. But what is the connection?

* Stephen Van Rensselaer Douglas b. March 24, 1790, in Albany and who married Caroline H. Whitehead was the 9th child…