New material comes my way on a daily basis, and adding this to the Douglas Archives could be a full time business. Sadly, many other responsibilities make this impossible! probably that is just as well.

The genealogy database now has 151,362 Individuals:and 64,109 Families. However, getting these on-line is a major task, so I tend to restrict this to about once a month.

I do try to update the history section every day or two. This is a relatively easy process. Sometimes,… Continue

As many already know, my current priority for research is often dictated by the most recent request for assistance with a family tree. However, my current work is correcting a Douglas branch that I had thought had died out.
I received a message from the great great grand-daughter of Sir Robert Andrews Douglas 3rd bart.of Glenbervie, proving that he did indeed have a family, and so I…
Continue

There are only 7 memebrs so far, but a Facebook group has formed in an attempt to beat some of those Tennessee brick walls.

If that's where your Douglas family has connections, maybe you should consider joining?

Or you could form a group here!

Some of old editions Burke's Peerage have "living temp Henry II", which is fairly obvious, but what does "living 5 Henry IV" mean, I wondered?

I discovered that this is the system of regnal years which in medieval times was more commonly reckoned from 25 March (or sometimes from 25 December). In England, and later the United Kingdom, until 1963, each Act of Parliament was defined by its serial number within the… Continue

On the scent of Sir James Scott Douglas: hare coursing or coarse hareing?

Sir James Scott Douglas (on right, with Northern Daily Express editor John McDonald, circa 1966) taught me that gentlemen recognise each other rather like dogs recognise other dogs - by scent. We were companions in a human crush during hare-coursing near Liverpool (not a sporting entertainment I could possibly enjoy) and James was hailing people and being hailed by people who were several layers of… Continue

Our congratulations go to Mrs Elizabeth Margaret Douglas, who receives an MBE for her work with the British Red Cross in Castle Douglas, Dumfries and Galloway in the 2010 Queen's Birthday Honours.

We also congratulate Mrs Patricia Anne Douglas, who receives an MBE for services to Dance in Edinburgh.

One of Scotland's most senior noblemen, and potential chief of the House of Douglas, the Duke of Hamilton, has died, Buckingham Palace has announced.

Angus Alan Douglas-Hamilton, who suffered from dementia, died on Saturday 5th June 2010 at the age of 71.

A spokesman for Buckingham Palace said: "The Queen is sending a personal message of sympathy to the family." 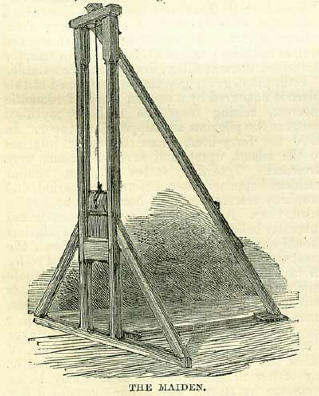 After ruling Scotland under favour of Elizabeth for nearly ten years, Morton fell a victim to court faction, which probably could not have availed against him if he had not forfeited public esteem by his greed and cruelty.
It must have been a striking sight when that proud, stern, resolute face, which had frowned so many better men down, came to speak from a scaffold, protesting innocence of the crime for which he had been condemned, but owning… Continue